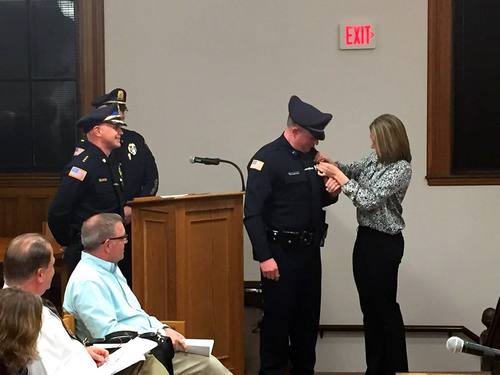 Above: Southborough’s Sean P. McCarthy being pinned with his new Sergeant badge by wife Tina. (image from Facebook)

In the spring, Selectmen approved an additional sergeant position for the Southborough Police Department. Last night, they unanimously approved the selection to fill the spot. Detective Sean P. McCarthy, a Southborough resident, was promoted.

The choice is of unanimous concurrence with the members of the Command Staff.

Detective Mccarthy is a town resident and holds a B.A Degree in Criminal Justice from Roger Williams University. He has over ten years of experience with the Department having served in the Patrol and Detective Units. Additionally, he is the Departments lead firearms instructor, (DRE) Drug Recognition Expert, and is assigned as a member of the Worcester County Regional Drug Task Force. Detective McCarthy has been awarded the Police Commendation Award from Framingham Police, Police Service Award, and has been recognized as the Officer of the Quarter.

Detective McCarthy placed first in the competitive process which began with seven candidates. He was able to obtain the top score in the Job Performance, Assessment Center, Written Test, and Board Interview categories. In my career, I would be hard pressed to think of another candidate who has prepared and demonstrated through his work performance, dedication, and commitment to the profession as more qualified to accept a position of leadership.

The chief explained that the selection was based on a long rigorous process. McCarthy and other candidates studied hundreds of pages of department policies, procedures, rules, regulations, and case law in preparation for the 100 question exam. They were then sent to an outside assessment center, and interviewed by the Board of Selectmen. They were graded in areas job performance, training, education, experience and seniority. Detective McCarthy was the top scorer.

Prior to selectmen’s vote, Chief Paulhus also shared that McCarthy organized and participated in the department’s Boot Drive for Family Reach. They raised nearly $20,000 in past two years for the organization that assists families with a child or parent afflicted with cancer.

Chief Paulhus told the public that when he thinks of McCarthy, he remembers the saying “If your work speaks for itself, then don’t interrupt.” Both he and selectmen remarked on the turnout from members of the department that showed up to support him.

Selectwoman Bonnie Phaneuf said he should not his colleagues behind him show their confidence in him and the importance of his leadership. And member Dan Kolenda said that there had been a number of wonderful candidates for the post, and McCarthy had risen to the top.

He praised McCarthy as having a strong commitment to community policing, “which is what we are about in Southborough”.

An announcement by Chief Paulhus today reminded that the position Sargeant McCarthy is filling will be the Officer in Charge for the overnight shift.