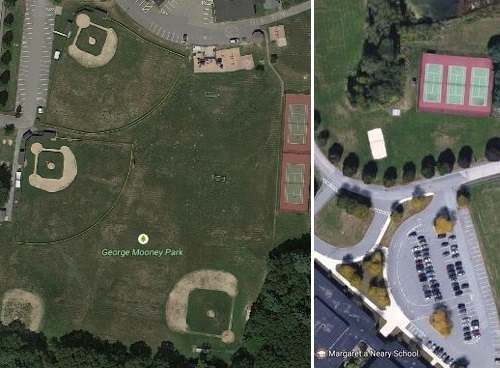 Above: Recreation is seeking to light athletic fields and tennis courts (images from Google maps)

Tonight, the Recreation Commission is holding a meeting to discuss their plans to install lights at a baseball field and tennis courts. The meeting is apparently a result of public push-back at last week’s Zoning Board of Appeals hearings.

Recreation is looking for height variances at Mooney Field (by Finn School) and Richardson Courts (by Neary School). According to Southborough Wicked Local, the department hopes to install 60 ft poles at Mooney and 50 ft poles at the courts.

The article said that the ZBA continued the hearing for Recreation to work out issues with neighbors opposing the plans.

No details were given as to the objections. (And I wasn’t at the ZBA meeting.) But comments made by another board prior to that meeting give some insight to possible concerns. (As do comments made on the blog yesterday.)

Last week, the new Town Planner updated that Recreation submitted an application to the Planning Board for installing the lights. Planning member Phil Jenks recommended the applications “held up a little bit”.

Jenks is an abutter of a similar, still incomplete Recreation lighting project. The Town approved installation of 40-80 foot lights at Choate Field, in front of Woodward school. Installation is behind the original schedule. It should be completed this spring (hopefully in time for the start of soccer).

The lights are taller than the ones they are replacing to provide better coverage of the fields. Recreation pitched to Planning that shields directing the light to the field, new timers, and remote operation would greatly reduce the “light pollution” abutters currently experience.

At the time that Planing approved Choate lights, Recreation agreed to work with neighbors if there were any issues.

If neighbors had problems, they would contact the Recreation Department to request lighting adjustments. If they continued to have concerns, after a year had passed the Commission would hold a meeting to work through issues.

Last week, Jenks said he believed it made sense to see the new lights at Choate in action before approving new Town projects with presumably the same kind of lights.

Member Andrew Mills, who also sits on the Community Preservation Commission, explained that Articles for CPC funding of the lights are headed to Town Meeting. And he said there is strong advocacy for the lighting.

Lighting of Mooney field is something Southborough Little League has pushed for over the years. The field is needed for both play and practice by many Southborough teams. Lighting that extends hours of use will allow greater access.

The SWL article explains the motivation behind the additional request at Richardson Courts:

Many times programs take up the court, leaving little time for the general public, according to the application.

Chair Don Morris said they could have the discussion with Recreation. But if they submitted a proper application, they can’t deny hearing it. Jenks concurred, but said it was worth having the discussion. He hoped the Choate lights would be completed in time for it to not be an issue.

Morris forecast another issue the public may have with the Mooney and Richardson lights. Woodward has been lit for decades, while the other two sites have never been lit.

A few commenters on the blog yesterday also objected to the look of the new lights at Choate as not in keeping with Town character.

Carl, have you been to Boston? I can breathe just fine there. This is Southborough, and it’s 40 light bulbs…give it a break.

Thanks to the committee members and representatives from Southborough Little League (SLL) for coming out in the snow to talk with neighbors about this project. While most of the discussion focused on the hours of use my point was more along the line of a regular taxpayer in town. How much is this going to cost and who is going to benefit. The fact of the matter is that this expenditure would be a subsidy for a very small population. Only the under 12 baseball program will be playing on this lighted field. No Babe Ruth, T-Ball, Softball, Soccer, Football, Lacrosse, Rugby, or Track. While it appears that girls are allowed to play Little League, I don’t know how many actually do.

This gives a per hour cost of between $40 – $46 an hour of use for the initial costs. This does not include ongoing maintenance costs for the software services and the hardware. The users will be paying the cost of the electricity used. The SLL will also be paying some of the costs, but that number was not available. As a taxpayer, I am concerned about the narrow focus of this project.
The Choate project was approved and is awaiting installation at this time. While at a comparable cost and replacing existing hardware, those lights are used by many more groups than will be able to use these; Ice Skating, Field sports, Outdoor Basketball and the Softball League.

While building a field of dreams is a nice concept, I feel that our monies could be better spent.

Thanks for the analysis. I completely agree that the cost per hour doesn’t provide the value. I’d love to see where the number of projected hours even comes from because that number even seems high. Lights on the tennis courts seems like it would make even less financial sense.