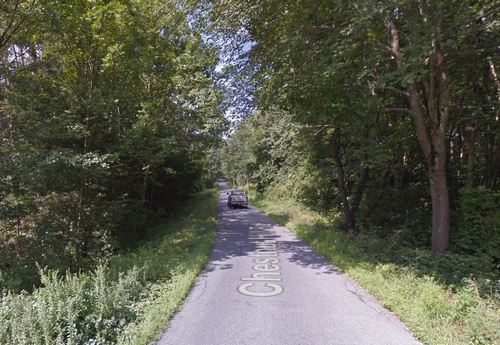 Above: On Tuesday, Selectmen will hear about a proposal to convert the northwest end of Chestnut Hill Road into a two way street. It’s just one of many road project Public Works is juggling. (image cropped from Google Maps)

The DPW has a lot of road projects in the works. I have so many updates to share that it’s likely at least one project effects you.

This Tuesday, Public Works Superintendent Karen Galligan will be talking to selectmen about two potential projects. The board will be asked to consider turning the second end of Chestnut Hill Road into a two way street. And they’ll be asked to weigh in on a request to cut a path through an island on Davis Road. She will also be asking for authority to handle the next step on the Main Street project.

And last month, Galligan updated the board on projects related to Deerfoot Road and Cordaville Road. I touched base with her today for more details.

Here are the road updates.

Southborough has a lot of “scenic” roads. But Chestnut Hill Farm is certainly high on the list. The back road to Northborough starts off from Main Street as a two way for the first 2100 feet. But soon past the entrance to Chestnut Hill Farm, the road becomes a narrow, one way, windy road. Most of the route is lined by nothing but trees and farm pastures.

That’s about to change, thanks to the planned development of the Chestnut Meadow 12 home subdivision. Galligan wrote in a memo that officials are concerned about the road’s ability to hold up under heavy construction vehicles for the project.

Public Works, Police and Fire all recommend turning the last 1,000 ft leg of the road into another two way. This would also allow safety crews a second point of access to the development for emergencies.

The recommendation appears to mean that an over 1,000 foot section in the middle (including the aquaduct crossing) would be preserved as one way. Galligan writes that they considered a temporary option during for truck traffic during/for construction only, but decided against it:

Click here to see the full memo. Galligan will be presenting the proposal to selectmen this Tuesday night.

According to Galligan, the island dividing Davis Road has cuts allowing two way turns for every driveway except 7 Davis Road. A request has been made for a cut allowing turns from that property. Because neighbors could object to aesthetics, Galligan believed a public discussion should be held. She’ll be presenting the plan to Selectmen on Tuesday. Click here for the memo with images.

The Town is moving forward on a project to improve Cordaville Road. Surveying of the road was conducted in the past and the Town is moving into design phase. Galligan told selectmen that the Public Works Planning Board will host meetings with residents and the public to get feedback on the design. As of this afternoon, Public Works was in process of sending out letters to residents on the road. That meeting is scheduled for September 18th.

Following a discussion with concerned residents at the July 19th selectmen’s meeting, Public Works sat down with residents. In August, selectmen approved spending up to $200,000 in Chapter 90 funds to improve safety at the intersection of Flagg and Deerfoot roads. The money is for design and construction of a safer intersection. The design contract did go out to bid and just came back.

The new design will narrow the intersection to deter truck drivers from attempting to turn right from Flagg onto Deerfoot. (That overly ambitious maneuver has led to many trucks ending up stuck on the property of the home across the street.)

Public Works did follow up on selectmen’s vote by requesting a truck exclusion from Deerfoot Road. At this point, they haven’t gotten a response from MassDOT.

In addition, Galligan has reached out to GPS companies asking for them to change the routes for trucks to avoid that route. This afternoon she updated that the companies had been “responsive” but she is unable to tell if they have incorporated it. (She doesn’t have a GPS specifically for trucks.)

For a look at the intersection design and more details on the July meeting with residents, click here.

The Town is almost ready to send out easement letters to residents. In preparation, Galligan is asking for authorization to work the easement process with the property owners and to negotiate compensation changes with help from Town Administrator Mark Purple.

Packages will be hand delivered or sent by certified mail. Property owners impacted will receive a letter, plan of easement area(s), the Just Compensation Report based on the appraisal and the Federal Acquisition Guide. They will have 30 days to consider and ask questions.

At the end of that period, selectmen will vote on the property acquisitions and “award the damages”. This timeline is still in keeping with the construction schedule to begin breaking ground in April.

There is no mention of the Vale Terrace/Woodbury Road junction issue. It is not the first time it has been dug up and there has been no work on it for weeks. I thought the last time they repaired this issue, it was a permanent fix, but apparently it didn’t work. It is worrisome as it seems like it is a sinkhole waiting to happen :-( It is like going over at least 5 very severe speed bumps at that intersection if you are coming from Vale Terrace onto Woodbury. Does anyone know if it will be repaired in the near future?