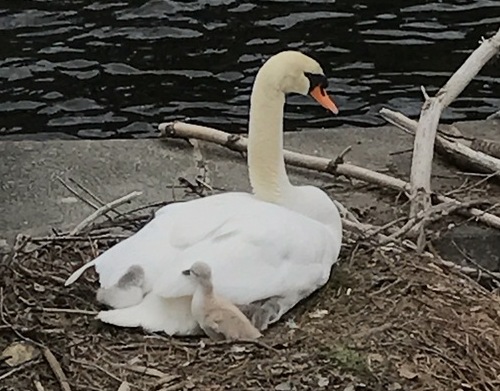 Above:  In May, a reader shared the good news of the cygnets hatching via photo. Now another reader is wondering what happened to them. (image cropped from photo by Beth Klein)

A reader reached out to ask if I could find out what happened to the baby swans on the Sudbury Reservoir.

I know that many residents and readers have made a habit of watching the swans on their regular walks or runs down Parkerville Road. One reader noted that the pair of swans on the Reservoir had hatched 6 cygnets in the spring. Not long after, he observed that there were only 3 cygnets left – then only 1.

He writes that 2-3 months ago:

I came across a a guy who was preparing to put a kayak into the reservoir off Parkerville. I stopped and spoke with him, noting watercraft were prohibited. He explained that he’d already called the authorities and had secured permission. He was on a mission to rescue the cygnet as it had a fish hook in its bill (ouch!). I had observed the cob and pen a few days before – one was in the water, the other onshore with the cygnet, which seemed to be sleeping.

Since that time, I have seen the cob and pen only once or twice – no cygnet!

He is hoping another reader can shed light on the cygnets’ fate. So am I.

Do you know what happened to the last cygnet? Was a rescue operation successful?

Do you have information on what killed the first five?

They are not native to this area, in fact they are considered invasive, anything could have happened to them , like the story of the big fish eats the little fish, it’s all part of nature

The swans may not be native to this area but they are beautiful to watch. As far as I am concerned, “invasive” applies to the nasty, awful Canadian geese that spoil the water and all our town fields and yards!!

My understanding is that someone bought and/or brought the pair of swans to the reservoir a couple of years ago – invasive or not.

…and regarding the obnoxious, nasty & lazy Canadian geese – yes they foul fields, lawns and the water in the reservoirs – which is now brown with algae – thanks to all their fecal activity.

BTW, an intermittently strobing amber light will effectively drive them away

Could the schools use an amber light to get the geese off the Woodward soccer fields? Pretty awful stuff for small kids to have to walk on.

The schools could. I advised the groundskeepers at Fay of the same thing, since their athletic fields are regularly fouled by ‘Geeses Feces’, although Fay has not installed any
of the lighting.

I worked at a facility a few years ago that had the issue with geese and the building’s facilities management people installed the amber strobe lights – it does work – after a fe weeks, the geese abandoned the location and did not return (hooray!!!).