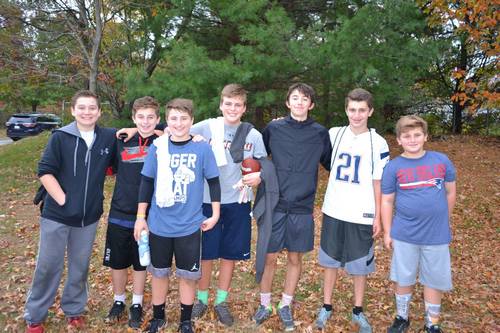 Above: Dylan Locke and other’s at the flag football event he organized in support of the Southborough Food Pantry. (photo from Facebook)

It’s time for another roundup of residents making news. There’s too much to share in one post, so this one will focus on residents doing good.

Looks like the FOODball fundraiser for Southborough Food Pantry was a success.

Dylan Locke, an 8th grader at Trottier, had recently volunteered at a local food pantry with his church’s youth ministry and was inspired to do something more to help out. . .

Dylan chose a flag football game, because it is a popular pass-time for him and his friends, and he decided to combine his love for the game of football with his desire for helping out the pantry. . .

over 40 children came out and played the game, which raised $565 for the food pantry. (read more)

In 2014, Erika Alvarez was diagnosed with a rare form of advanced sarcoma and currently receives treatment at the Mass General Cancer Center. While there is no cure yet for her cancer, Erika’s care team at Mass General, including Dr. Edwin Choy, Judianne Henderson, NP, and David Miller, RN, treats her illness as a chronic condition with both traditional and supportive treatments. Erika’s runway partner Irene Martyniuk, acupuncturist and co-director of the Katherine A. Gallagher Integrative Therapies Program at Mass General, introduced her to acupuncture as an alternative therapy to complement Dr. Choy’s treatment plan. Erika appreciates the support and reassurance Irene provides.

Andrew Seto, director of compensation at Staples, was diagnosed with stage IV lung cancer in September 2014 at the age of 45 and received treatment at Mass General. Last month he began his second-line targeted therapy at the Cancer Center. He credits his oncologist, friend, and runway partner Dr. Inga Lennes, Senior Vice President for Service Excellence and Practice Improvement at Massachusetts General Physicians Organization, with giving him hope and helping him maintain his quality of life during his cancer journey. (read about the event here.)

And the Southborough Food Pantry thanked the Southborough scouts and the community for supporting Scouting for Food. Scouts successfully collected and helped sort 8,300 lbs of food for families and individuals in need: