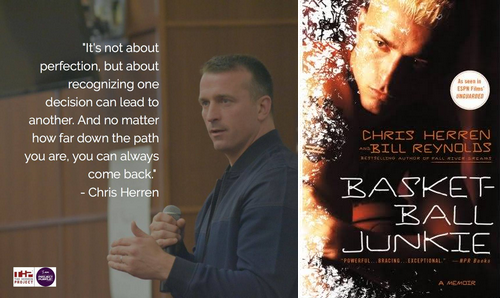 Above: The co-founder of the Herren Project will be addressing St. Mark’s students next week about overcoming adversity. (images from Facebook)

St. Mark’s School is inviting the community to another keynote from its “Gray Colloquium” series. Their next presenter is a former Celtics player and author of the memoir Basketball Junkie:

Chris Herren was a high school basketball legend from Fall River, Massachusetts who scored over 2,000 career points and was named to the 1994 McDonald’s All-American team. Herren realized his lifelong dream of playing in the NBA only to lose it all to the nightmare of drug addiction—first alcohol, then cocaine and oxycontin, finally heroin. Alcohol and drug-free since August 1, 2008, he has refocused his life to put his sobriety and family above all else. He shares his harrowing story of abuse and recovery in his memoir, Basketball Junkie, as well as in numerous interviews throughout the Emmy nominated ESPN Films documentary Unguarded, of which he is the subject.

Herren is co-founder of The Herren Project, “a nonprofit organization dedicated to providing treatment navigation and mentoring programs to those touched by addiction, and to educating people of all ages on the dangers of substance abuse.”

But, given that this is part of the school’s Building the Future themed series and not billed as a drug lecture, don’t expect the full focus to be specifically on addiction. According to his speaker bio:

In his inspiring and life-changing presentations, Herren connects with audiences, teaching them that it is never too late to battle back from adversity and make your dreams become a reality.

He will be speaking to St. Mark’s students on Monday, April 2nd.

While the event is free and open to the public, it’s once again during their school day. It takes place 12:50 pm in the school’s Putnam Family Arts Center.

For further information, contact Adam Jewell or Caleb Cochran at 508-786-6000