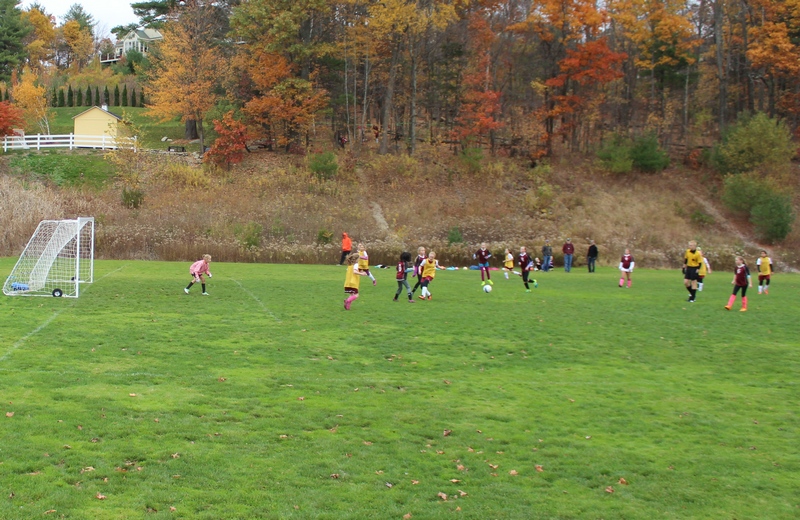 Above: Many parents in town support an effort to fund fixes to Kallander Field. But the manner the Recreation Commission pursued to bring the project back to voters is a source of conflict among Town officials. (photo by Beth Melo)

This week, two selectmen let their displeasure be known about the Article to fund Kallander Field repairs. The focus was the mechanism for bringing $248,300 request to voters. Bypassing approval from the Board of Selectmen, the Recreation Commission Co-chair organized a Citizen’s Petition Article.

Recreation Co-Chair Kristen Lavault rebutted an accusation that the Commission was just unhappy with the April vote. She defended that last minute concerns raised the day of Town Meeting hadn’t given the Commission fair time to respond. Now that they have had time to look into it, they want a chance to address those concerns for voters. She will be working with the Commission’s consultant to address the issues raised. (For those answers, scroll to the bottom of the story.)

She explained that the Kallander project came out of what they discovered this year were “very immediate needs” and a long road to meet them. Their main concern is maintaining safety on Town fields. Following the failed vote, the commission received overwhelming response from people who wanted to bring it back.

But selectwoman Bonnie Phaneuf made it clear that she was angered by the choice and the precedent being set. She said that the Board had given Recreation “a pass” to go to Annual Town meeting, while saying no to other important asks. Referring to money that’s very tight, she lamented:

We are not even funding the essential of a [full day] Kindergarten class and yet we’re running Town Meeting on Petition Articles. . . I caution Recreation. I know you have the support, but you do not want this government managed this way.

Phaneuf worried about the message sent to other departments. And she referred to other hard choices the Board has made not to increase Town spending. The selectwoman also worried about one department being overextended as costs are constrained for others.

Selectwoman Lisa Braccio echoed concerns. She said that the board has always been supportive of Recreation. And, she supports Citizens Petitions – except for relating to a Capital Expense item. She believes that Town departments should work in collaboration as a team, following the same standards. She worried about a future where departments and committees use Citizen Petitions to compete for funding.

Lavault assured that the Commission is committed to incorporating their future spending into the Town’s Capital Expense plan.

Former Recreation Chair, Selectman Brian Shifrin voiced support for the project. He said he understood questions about the method Recreation took, but he defended it.

Shifrin praised the work that the Town’s budget team did going into Town Meeting. His one criticism was that they need to be more receptive and flexible when there is a project outside of that plan that has widespread community support.

Earlier in the discussion, Phaneuf pushed Southborough Youth Soccer Association for answers about their involvement in the Fay Field project at Mill Street.

Phaneuf was frustrated that after she raised questions about it earlier this year, SYSA changed text on their website to promise an update in mid-April. She accused them of waiting for Town Meeting approval on Recreation projects before sharing the status, hoping Rec projects would replace the Fay one. She followed, if SYSA had money to fund the Fay project they have money to fund some of the Kallander project.

SYSA President Colin Hines told the board that they are still working with Fay. But he said that the financials had been challenging since their numbers have been declining over the past five years. He said that while that model used to look “really good” now they’re trying to be “really conservative about our spend”. He confirmed that the group would want to use both Fay and Town fields, saying they were using a multi-pronged approach to meet their needs.

As for the issues related to the actual field project. . .

Opponents to the project, including the President of Southborough Open Land Foundation, claimed at Town Meeting that problems on Carriage Hill’s property were causing drainage issues down the hill.

On Tuesday, Public Works Superintendents Karen Galligan, said the basin up at Carriage Hill has been maintained properly. She said that, if the property lines are where SOLF believes them to be, the issue is with drainage and a trench that are on SOLF land. For the Town to fix issues and maintain the system easements may be required. But if SOLF doesn’t allow access for that, the Town can still intercept the water on the Kallander field property.

Braccio said they had a positive meeting with representatives of Carriage Hill and SOLF, but noted that their boards had yet to vote. She didn’t want to tell Town Meeting one thing and have a different outcome. But Shifrin disagreed. He indicated that based on Galligan’s report, those votes were irrelevant.

The discussion all took place within the Pre-Town Meeting run-through at Tuesday’s BOS Meeting. You can see the full discussion via Southborugh Access Media’s video. Click here to go straight to the topic.

Some points of clarification….

-We took the route of partnering with Fay because SYSA needed access to more local turf fields for a variety of reasons not the least of which is the amount of play time artificial turf affords over grass. This Spring is a perfect illustration of that need—about a quarter of all games have been cancelled due to weather. A vast majority of those games would not have been cancelled if we had playable artificial turf. And while 9-11 will help, it is one field shared by multiple sports and multiple towns. Additionally, 9-11 does not accommodate 9v9 and 7v7 format which constitutes the vast majority of SYSA travel teams.

-If the Fay turf project does break ground, it will be lined for multiple sports with the intention of the turf being used by a variety of local sports including lacrosse. We have taken the lead on the project because we foresaw the need for turf early—and were skeptical about the ability to have more artificial turf fields built in Southborough in the foreseeable future (hopefully we are proven wrong).

-The major portion of funding for a SYSA/Fay turf field would be through outside rentals (ie, soccer and lacrosse clubs) and tournaments. Those fees would pay to service the loan we would need to get the project done. If our numbers continue to slightly decline, we would just rent more heavily to outside user groups to offset that.

-Even with a Fay/SYSA turf field, we would continue to use town fields heavily. Just as we do today, our in-town teams and younger travel teams would rely on town fields to practice and play games.

-The SYSA/Fay team has spent hundreds of hours and a significant financial investment trying to bring the turf plan to fruition. It has been a great partnership that will hopefully result in an awesome venue for Fay, the various youths and adults of Southborough and our neighbors.

I am glad to answer questions directly if anyone needs more context. See our web site for contact information: https://southborosoccer.org/