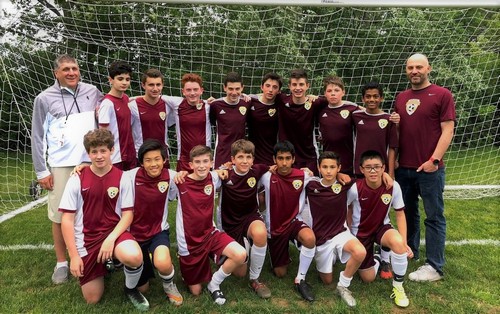 Some good and bad news in local sports this week.

Algonquin’s last-standing teams lost their footing in sectional tournaments. Girls Rugby lost their Semi-Finals 31-7 to upper seed Lincoln-Sudbury on Wednesday. A supportive tweet from the school’s Athletics Dept indicates the team struggled with injuries this season.

That afternoon, Girls Golf competed in the state tournament and came in 5 of 6. (As I previously posted, the Westborough/Algonquin team seems to be treated as a Westborough team – so I’m not sure if any Algonquin players were on the greens. But you can see those results here.)

Yesterday, Boys Tennis played in their postponed sectional Finals. For the third year running, they failed to snag the title. You can read about their 3-2 loss to Marlborough here.

But last night, Southborough youth sports had a big win worth bragging about. It may be a balm to soccer fans disappointed by US failing to make the Men’s World Cup.

An SYSA team is advancing to Massachusetts Tournament of Champions. Here’s the news shared by proud parents:

On Thursday night the Southborough Boys Grade 7/8 soccer team accomplished a rare feat by advancing to the Massachusetts Tournament of Champions (MTOC). The MTOC is a season-ending tournament that brings together champions from town-based travel leagues from across the state.

The team won both of their elimination bracket games by a combined score of 9-0 and will represent the BAYS (Boston Area Youth Soccer) league next weekend against representative teams of leagues throughout Massachusetts.

Southborough has the smallest population by far of all BAYS teams that advance to MTOC from various age groups. Making it even more unique, the boys play 11v11 which makes it difficult traditionally for our small town to compete with the likes of Brookline, Newton, Framingham, etc.

Best of luck to the boys next weekend! If anyone would like to come support the team they will be playing at Progin Park in Lancaster, MA at 10:00am and 3:30pm on Saturday, June 23rd.