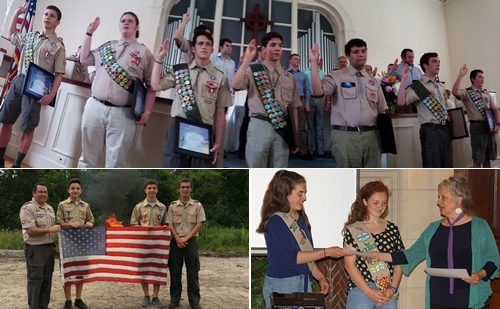 Above: Sharing news on Boy Scouts and Girl Scouts’ honors and service from this spring. (image cropped from photo provided)

I’m rounding up more Scout news that I’m overdue in sharing. It includes good works by Troop 1 and a Silver Award earned by two Girl Scouts for their efforts in town.

In early April, the Troop was scheduled to stay at Camp Resolute in Bolton working on merit badges and advancement. Unfortunately, the March storms caused extensive damage, downing enough trees and limbs to leave the campsites unusable.

Instead of taking the weekend off, the boys decided to spend that Saturday helping to clear the campsites of all the debris. They found it “a day well spent”, benefiting the region’s Boy Scouts and Cub Scouts who use the Boy Scout property for camping and adventures.

Below is a list of the new Eagle Scouts and their service projects:

Anthony Zalev: Southborough Trails Committee – constructed a bridge over a small waterway and a set of stairs leading to Route 30 to allow safe passage on the trail

James Richardson: Franciscan’s Childrens Hospital – constructed an entertainment cart and equipped it with a video game console and video and board games that could be moved to patient rooms

Evan Kessinger: Southborough Baseball/Recreation – designed, ordered, and installed a sign for the Mooney Field Complex so visitors can now find their way

Mitchell Hills: Southborough Trails Committee – Trail work including adding posts and trail blazes to mark a trail leading into Westboro so people would not get lost or end up at the MWRA facility

Alec Ober: Neary Elementary School – Added 3 hopscotch areas and rehabilitated the US Map and hopscotch paintings on the playground blacktop.

Here are some photos they shared from the event. (Click thumbnails to enlarge)

SOLF asked me to share news on two Girl Scouts for their Silver Award project benefitting the Town:

The Southborough Open Land Foundation (SOLF) held it’s annual meeting recently and presented an award of special recognition to two Southborough scouts; Shannon Provencal and Kathryn Gowdy. The two eighth grade girls [were recognized for their] project for their Silver Award – the highest award a Cadette Scout can earn.

They had learned that while many trails in town receive heavy use; like at Beals Preserve, other trails are less well known and have become over-grown. So, they worked with the Southborough Trails Committee with a goal of increasing awareness of the many options for hiking trails in town and which culminated in “Hike Southborough Day” last September.

The entire project included:
• Using the AllTrails app in order to get clean, new maps to use for brochures that the STC will be creating.
• Building several new trail map boxes to replace old, rotted ones and to add to new ones to prominent trail junctions to improve usability
• Creating 5 new geocaches which include interesting information about the history and geography of the area, to increase foot traffic and trail use and awareness
• Meeting with 2 cub scout packs in town and teaching kids about Leave No Trace principles and Hiking Safety guidelines

“Hike Southborough Day” was an all-day event with five guided hikes throughout the day; new geocaches with awards for “first to find;” a kids’ scavenger hunt as well as a tent set up at their base at Chestnut Hill Farm with water, snacks and maps.

Besides the Trail Committee, Shannon and Kathryn also collaborated with The Southborough Open Land Foundation and Chestnut Hill Farm. They approached Wegman’s store which donated snacks and water.

When asked if the project had expanded much from their original idea, they both laughed and said it absolutely had! The event was a great success with many families attending. The two showed a good sense of organization, leadership and maturity.

S.O.L.F. likes to recognize those who increase environmental awareness in our town or region. Shannon and Kathryn certainly achieved this by introducing so many families to the beautiful nature trails right in our own town and hopefully inspiring many to revisit the trails often.

SOLF is a private non-profit organization whose mission is to preserve, protect, conserve, and enhance the natural resources in the Town of Southborough. Visit SOLF.org.

It’s not exactly a Scout-specific story, but . . . contributed photos from VFW Commander Steve Whynot show that Troop 1 members helped out the veterans at the annual service to retire US Flags in poor condition. (Click thumbnails for captions)