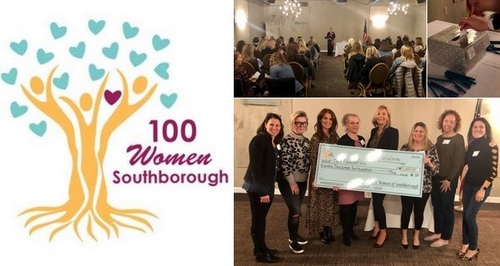 This summer, I posted about a group of women in Southborough working together to make a difference. To make a real impact, they were seeking power in numbers. The charitable group was hoping to round up enough members to justify their name – 100 Women of Southborough.

They exceeded that goal. But they’re still happy to welcome more.

The point of the organization is to combine members’ donating power. To join them, you just need to be willing to commit to donate one hour of time and $100, four times per year.

The women have already donated $24,000 to two local charities. They expect to vote on the next donation of at least $12,700 at their next meeting.

On March 7th, the group will hold a presentation ceremony for its $12,400 to the Ellie Fund. They’ll hear from the charity about the impact the donation made.

The members selected that cause at their December 4th meeting. In that meeting, members celebrated the $11,600 donation to the Taly Foundation designated at their first meeting in September. (Click thumbnail right for enlarged photo with details.)

As for the charity to be selected in March – the group explained it’s process as follows:

Before each meeting, any member of 100 Women of Southborough is able to nominate a MA based, non-profit organization 501(c)(3) with in a 30 mile radius. At each quarterly meeting, three of the nominated charities are chosen randomly and members who have nominated the organizations present a five-minute description of the local organization or agency.

Following the presentations, members cast written ballots. Ballots are then tallied to select the winning charity for the quarter. Each member then makes out a personal check directly to the 501(c)(3).*

You can read more about the group in my previous post.

To join the women, visit their Facebook page (facebook.com/100WomenSobo/) and click on the sign up button for the membership commitment form. If you have any questions, you can email 100womenofsobo@gmail.com.

*The “big checks” presented are ceremonial representations of the total from the members’ individual checks.

Updated (2/5/19 9:54 am – I corrected unfortunate typos that I was alerted to. I was off by an entire comma placement in the amount to be voted on in March and the amount donated to the Taly Foundation based on the September vote. The donations were still generous – but they’d have needed to be more than “1,000 Women of Southborough” for the math to work on my original wording. My apologies.)