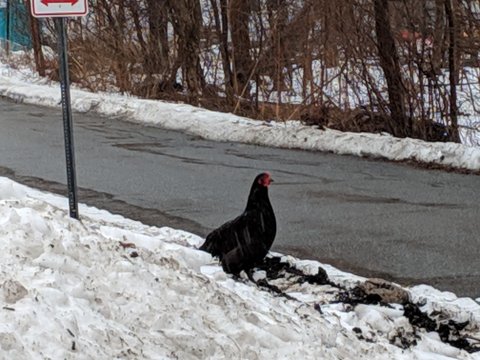 Above: It wouldn’t be the first time a post I wrote was accused of being for the birds. And it’s not likely to be the last. (contributed photo)

A reader shared a photo of a “rooster”. I can’t tell if that’s accurate or if it could be a hen.

But, I’m confident it’s not a duck. So it’s not likely to be enjoying the little ponds forming out there as the rain hits the snow. And, unlike the wild turkeys in town, it’s a safe bet that he/she has a home in town where it should be roosting.

(Though it may be trying to relocate. It was spotted near the train station.)

The fowl was photographed on a snowbank at the corner of Park and High Street. Since neighbors questioned didn’t know who the chicken might belong to, the reader reached out to the blog.