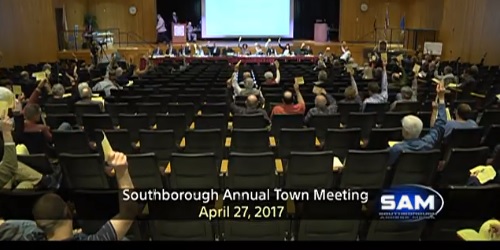 Above: Late on the third night of 2017 Annual Town Meeting, voters in an almost empty hall approved a new “Electioneering” prohibition without questions or debate. One of several Citizen Petition Articles for the next ATM is looking to revisit and rescind the change. (image cropped from SAM video)

Thirteen of the Articles headed to Annual Town Meeting in March are the result of Citizen Petitions. Sponsors were invited to present their cases to selectmen and the Advisory Committee last week before they vote on petitions. Only two sponsors did – but one of them was responsible for most of the petition articles.

In Hanlon Shimkus’ presentation last week, she referred to most of her proposed changes as putting the Town “on parity” with other Towns in the state. The resident called many of her language/policies “standard” and “common practice”. Some she said were for clarity for residents or officials on processes or acceptable standards.

But one set of changes is intended to provide “balance” by putting more power in voter’s hands. That is a move to have residents directly elect Advisory Committee officers.

Selectmen opted to hold off on taking Article positions last week. But they did pose a few questions and make a couple of comments. Below, I’ve summed up the Articles and highlights from the discussion.

(For the full language of her Articles, click here for text copied from last week’s meeting packet. For comparison, you can click here to review current Town Code.)

Numbering of the Articles in the draft Warrant has been in flux. That caused some confusion during last week’s presentation. Since those may change again, I won’t be using them below. For now, I will just group them by theme.

*The proponent submitted Citizen Petitions under the name Karen Hanlon. In previous public meetings, she has referred to herself as Karen Shimkus. To avoid confusion, I’m using both of her last names here – as I have also seen her listed as “Karen Hanlon Shimkus” in some documents.