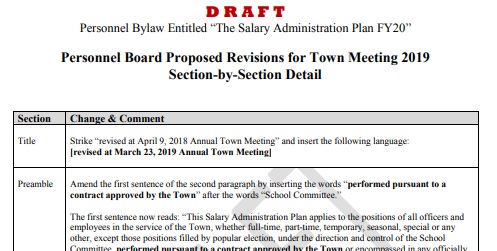 Above: With Town Meeting about three weeks away, the Personnel Board has posted an explanation of proposed changes to the Salary Administrative Plan. This year, the changes are considered minor, but one item about a stipend it has been a sticking point for some officials. (image cropped from the document)

The Town is still working on final budget numbers for Annual Town Meeting. But Advisory’s Chair is optimistic that the final ask will sound like a “cost of living” increase. Given where public presentations started (at about a 6.5% increase), she expects voters to be pleased.

On Tuesday night, Chair Kathy Cook told the committee that Town Treasurer Brian Ballantine showed her a revised budget that evening with a 2.4% figure. That didn’t incorporate some changes Advisory is suggesting. She hopes to get it closer to 2% before the March 23rd Annual Town Meeting.

One factor behind the reduced budget is the final figures came in for Algonquin’s budget. Instead of an increase, Southborough’s portion is a decrease of 0.5%.

Earlier that evening, a joint Pre-Town Meeting meeting was held with Town Moderator Paul Cimino. Cook asked for the budget to be proposed by Advisory this year. She said that given the amount of time and focus Advisory puts into the budget she wants to make clear they aren’t simply “rubber stamping” a Board of Selectmen request.

Cimino said he had already raised the issue with Town Counsel. He asked for the three of them to discuss it offline in context of Mass General Law. (I don’t know what will be stated at ATM, but the final warrant sent to print still listed it as proposed by BOS.)

Regardless of who “proposes” it on March 23rd, both boards will make presentations on the budget. Advisory is planning an approx. 10 minute talk to include a three year financial forecast. Cook said she wanted to explain the debt financing situation and clear up misconceptions. Another 5 minutes by Town Admin and Finance will address budget issues. Town Administrator Mark Purple assured that talks wouldn’t have conflicting information or be redundant.

Advisory and the Board of Selectmen hope to finalize numbers and get on the same page at next week’s BOS Meeting. But even if their committees’ overall budget positions line up – budget support may not be unanimous among their members. Each committee, plus the Personnel Board, is currently split on one $6,000 issue – a proposed stipend for an employee administering a grant program.

Selectwoman Bonnie Phaneuf, one member of the Personnel Board, and Advisory’s Chelsea Marie Malinowski all dissented against their committee’s majority votes to support the stipend. As I previously covered, Phaneuf cautioned that it was opening a can of worms.

Personnel Board Chair Betsy Rosenbloom said she supported the stipend after learning that the employee had been promised a salary increase when he took on the extra duties. She was also swayed that using a stipend means that the money can be shifted to another employee if the duties are transferred. In future years, it could be decreased or eliminated. Plus the money would be funded out of Green Community grant funds instead of Town taxes. And without the duties performed, the Town would miss out on grant funding – which was $250,000 last year.*

Cook clarified that the state funding is only if grants are successfully received next year.* (The fact that the stipend isn’t contingent on success for getting grants next year is one of the issues Phaneuf previously cited as a sticking point.)

When Advisory voted on Article positions, Cook advised Malinowski that she could oppose the stipend either by voting against the funding (under the Article 11 Budget) or the Personnel Board’s proposed Salary Administration Plan changes (Article 7) outlining the stipend. Malinowski voted against the SAP. She was initially joined by member Judith Budz. But Budz reversed her vote, indicating that she didn’t want to trigger a big to-do at ATM over the SAP.

According to Rosenbloom, overall changes to the SAP this year are small. Personnel has posted a detailed explanation of the changes for the public that you can read here. It includes an adjustment to update the part time wages table based on a study that hadn’t been done in at least 18 years. In the end it resulted in requiring an increase only to one part time worker’s salary by $0.38/hr. (Another employee whose salary would have been impacted is being promoted to full time status next year.)

Since my last ATM update on Monday, the Town issued the “Final Warrant” identified as the version for the printer. You can open that here.

This version includes budgets (though I still anticipate revisions on the floor at ATM) and a paginated Table of Contents. I don’t know all of the other differences, but can point out one set of Article revisions. Three of the Community Preservation Committee’s Articles were altered.

The Articles for new projects had indicated that they would be based on “signed Memorandums of Understanding on file with the Town Clerks Office.” On Tuesday night, Clerk Jim Hegarty pointed out that his office hadn’t received any MOUs. He was concerned that once the Warrant was issued, residents would come to his office to see the documents. Town Counsel Aldo Cipriano agreed that residents would rightly expect to see those on file. He believed that was the best procedure for CPC to follow.

CPC Chair Freddie Gillespie apologized for the misstep. She clarified that their intent had been for the papers to be on file as of Town Meeting, not in advance.

Gillespie explained that CPC projects have a lot more agreed upon details between the committee and applicants than specified in the Articles. Based on past issues, she wanted to certify that projects would follow those specifications – not just the description in approved Articles.

The MOUs aren’t ready to be filed. Details were still being finalized, the docs need to be reviewed by Town Counsel, and the committee isn’t likely to reconvene until mid-March. Articles in the revised Warrant now simply state:

Project to be completed in conformance with details as presented to the members of the CPC and to be documented in the application and signed Memorandum of Understanding.

Gillespie said that the CPC would shoot for having signed MOUs filed with the Town Clerk in advance for future Town Meetings.

*Since Southborough earned its “Green Community status in 2016, Facilities Director John Parent has applied for and received $392,865 in grants from the state. In 2018 alone, the Town cited $250K in grants as covering energy savings projects that reduce the Town’s carbon footprint and will purportedly save the Town $14,374 per year. (You can read about that here.) Each year, more Towns become Green Communities, so there is no guarantee for how much Southborough will receive in the future.

Updated (3/7/19 3:55 pm): At the March 5th Board of Selectmen meeting, Phaneuf asked to reconsider the SAP Article. It was to allow her to make the vote in support unanimous to avoid debate at Town Meeting. She said that she was willing to support the stipend this year, based on a letter issued by Purple committing that in future years, the job description would be revised to include the duties.