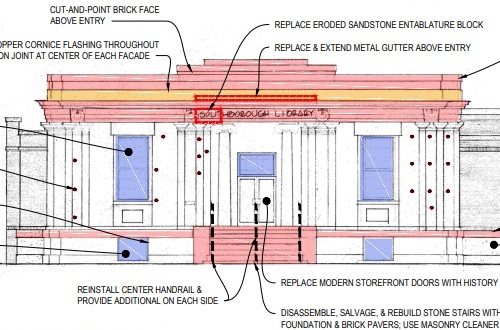 Above: Selectmen expressed support for funding repairs to the historical section of the Library through a CPA Historic Preservation Article. But the majority objected to a requirement to then preserve the restored facade. (image cropped from restoration project report)

[Editor’s Note: Full disclosure – I’m President of The Friends of the Southborough Library. On March 20th, our board voted to publicly support Article 22.]

The Board of Selectmen support an effort to use Community Preservation Act funds to fix the historic section of the Southborough Library. But they may ask Town Meeting voters to strike the “Preservation” clause from the Historic Preservation Article.

The Library’s original 1911 building, the smaller section facing Main and Common Street, is in need of repairs. Brickwork is deteriorating and saturated insulation on the roof poses serious issues.  The Library is working with the Community Preservation Committee on a more than $1M restoration project.

Last Tuesday, selectmen said they support the initiative. But most of them balked at the “perpetual Preservation Restriction” that comes with it. The PR would preserve the facade and windows of the historic section.

CPC Chair Freddie Gillespie said the committee was following best practices. She explained the bond would tie up the CPC’s ability to fund other Historical Preservation projects for 20 years. When committing that much money to restoring an historic property, it’s best to preserve it.

Gillespie also noted that if selectmen are just looking to do repairs and maintenance, not an historical preservation project, they can use the Town’s budget for that. CPA funds, are partially state matched* and funded through a separate surcharge than taxes that fund the Operating budget. They are reserved for specific project categories.

Selectmen Brian Shea, Dan Kolenda, and Bonnie Phaneuf argued against tying the Town’s hands on what it could do with the building down the road. They cited concerns about impact to future renovation projects. Gillespie rebutted that there are no restrictions to the interior back end of the building (the big 1989 addition). She furthered that a preservation restriction could also be worded to allow expanding up as long as the original floor exterior was preserved.

Selectmen and Advisory member John Rooney also questioned the situation if the Town looked to sell the property in the future. Gillespie said that the PR would bind whoever owns the building. But, she claimed that in general PR’s only reduce value by about 5% and can even improve value in an historic district.

Library Director Ryan Donovan told selectmen that he and Trustees would like to always keep the Library at its current site. But he acknowledged that down the road they will also need to investigate alternative construction at two other sites. It’s a requirement to apply for funding help from the state for a potential future renovation.

Library Trustee Richard Wallace surprised the board by claiming that while the Town could build an additional Library elsewhere, the current property must remain a Library. He said the deed restricts the property use.

Kolenda asked, if that’s the case, why is there need for a second restriction. Wallace indicated the deed doesn’t protect the original building from being replaced with new construction.

Chair Lisa Braccio said she would like to see the deed. Regardless, Braccio supported the project based on the location of the building combined with the community’s desire for historical preservation and investing in downtown.

Town Administrator Mark Purple said that it wasn’t “cut and dry”. He opined it is the Town Moderator’s call as to whether something meets that criteria. Upon questioning, Town Clerk Jim Hegarty’s asserted it would be allowed since they wouldn’t be adding something that wasn’t written on the page.

Prior to that, Hegarty spoke out against preserving the Library’s windows. Referring to his past service on the Recreation Commission, he claimed that the preservation of the South Union Building windows by installing “plexiglass” storm windows was a “disaster”. He said that you have to wear a coat in the building in the winter.

Donovan responded that he didn’t believe that windows would be the same as the Rec Center. He said that their consultant was very confident that the windows could be made to operate efficiently.

Kolenda asked Gillespie to have the CPC vote on taking the PR out of the Article. Gillespie expressed skepticism that they would support that – but she agreed to bring it back for a vote. Selectmen chose to wait for that before taking a position.

The full scope of Library building projects on this year’s Warrant are:

For more on the CPA project:

*Hegarty reminded the room that the state while the state used to match CPA funds at least to 50%, it has fallen over the years. He said it is now a 12% match.

Updated (3/12/19 2:11 pm): With Town Meeting on a different schedule than usual, I inserted a reminder that it’s quickly approaching on Saturday, March 23rd.

Updated (3/21/19 3:57 pm): I added information at the top about my role on Friends of the Library and our vote last night to support the Article.