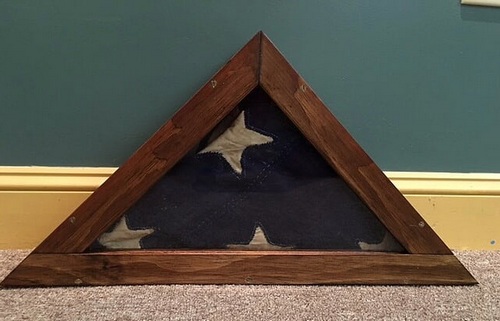 Above: To prevent further deterioration, the Southborough Historical Society has been keeping a Civil War era flag folded in a case. Town Meeting will now be asked to help restore and display it in its full glory. (image posted by SHS to Facebook)

In 1862, a U.S. soldier from Southborough was shot fighting in the Battle of Antietem. He subsequently died and was buried in Southborough with full military honors. More than 150 years later, Southborough voters will be asked to restore a flag believed to have been hand sewn for that funeral.

Article 23 would authorize $50,990 in Community Preservation Act funds for preservation projects run through the Southborough Historical Society. $20-22K of the money would fund restoration of the Civil War era flag. The remainder would be used for archival supplies and about 750 hours for a professional to complete the society’s conservation of its collection.

The Archival project is to conserve and restore significant objects or documents in SHS’ historical collection. The ultimate hope is that in addition to preserving Southborough history, the SHS can make it more accessible to the public. That includes for viewing by students and historians.

Selectmen unanimously voted to support the Article. But they also asked SHS to follow up on some concerns raised at last week’s joint meeting with Advisory.

The historic US flag was the item that received the most attention.

SHS’ Rebecca Deans-Rowe explained that the 34 stars on the flag narrow down the year to 1862. Given the name “BUCK” inked on the band, the flag was likely made by Buck’s family for his funeral.

The flag has deteriorated over the years. A 2016 Facebook post by SHS provides more details on the flag’s construction and disrepair:

the field and stripes are linen but the stars are cotton. Interestingly, the stars were all sewn on one side of the flag and then the blue fabric underneath each star was cut away so that the stars would show on both sides of the flag. It measures 7 feet by 10 feet. . .

Unfortunately William’s flag has suffered quite a bit of unintentional damage over the years. There are small rust stained holes in the white band caused by the flag being nailed up vertically outside for long enough for the nails to start to rust before it was taken down. . . the first 3 or 4 inches of the blue field were torn away from the band. Though that tear was repaired it’s obvious some fabric was lost when it was torn. . .

Time and the environment have taken their toll on the flag several small areas in the blue field have decayed away and most of the white stripes are so decayed that they have completely separated from their neighboring red stripes. Despite William’s family very likely taking care of his flag in a respectful way, nothing they could have done could have guaranteed his flag would survive intact; organic materials like linen and cotton decay over time.

Because SHS “owns” the flag, the Community Preservation Commission’s Article includes a clause to prevent them from selling it off at a future date. It must remain in their possession or be gifted to the Town. But the flag’s provenance may be in question.

SHS claims ownership as it was “gifted” to them in a past year by the Library. The 2016 Facebook post more colorfully describes:

This flag was given to the Historical Society by the Southboro Library staff after they found it thoroughly tangled up and stuffed in an old paper bag in the deepest depths of a closet at the library.

Upon questioning by Advisory member John Rooney, Deans-Rowe acknowledged that they don’t have ownership documents and haven’t spoken to any potential family members. Rooney pointed out that there is a Buck family in Town. He asked if SHS was concerned about the possibility of family members laying claim to the flag after the Town pays for restoration.

Deans-Rowe said they had begun digging around to find out about other ancesters. They were unsure if the family referred to was related. She quipped that she believed “possession was 9/10 of the law”. But she also agreed to reach out to the family. Chair Lisa Braccio said that as a neighbor, she would help facilitate that.

Prior to that exchange, Selectman Dan Kolenda encouraged SHS to consider displaying the flag beyond the Southborough Historical Museum. He said he’d like to see it viewed by a wider audience, like perhaps at the Library. Deans-Rowe pointed out that for preservation purposes, the museum’s humidity control and lighting are ideal. But she also said that the display would be mobile and indicated they may allow other temporary venues.

Deans-Rowe explained that while weekly attendance at the museum is low, the weekly open hours were fairly new. They hope to expand those and hold more events to bring in the public. (Frankly, I didn’t realize the museum is now open most weeks on Sunday from noon – 2:00 pm. It had been closed to the public except for special events. For info on that, click here.)

Selectwoman Bonnie Phaneuf had a different concern about displaying materials preserved by taxpayers at the museum. She questioned SHS’ ability to protect the flag and other items from fire.

Phaneuf pointed out that the museum lacks a sprinkler system. Deans-Rowe told selectmen that a fire safety system is already in place to alert the Southborough Fire Department of an alarm within seconds. She said they looked into a sprinkler but it would require a chemical suppression system since water would destroy the collection.

Phaneuf urged to find out at some point what that would cost. She followed:

this is an investment. I think we need to really to look at how we’re going to see that we’re safeguarding that investment.