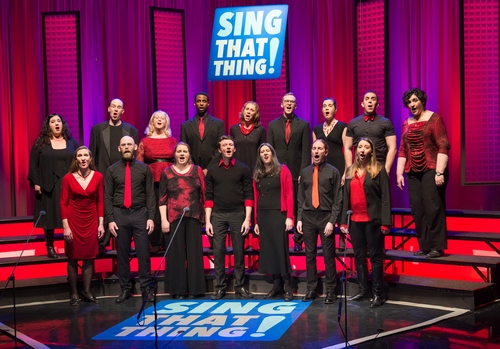 Above: A professional choir based out of our town is part of this season’s Boston-based TV choral competition. (image cropped from contributed photo)

This Friday, a Southborough choir is featured on the competition show “Sing That Thing!”

The WGBH series celebrates “the joy and diversity of choral music”. Its website explains:

Eighteen ensembles representing genres from barbershop and pop to gospel and classical will compete across seven episodes in three age-based divisions. The coaches will select two groups from each division to perform on the Grand Finale, when one group will be named the overall champion.

Labyrinth Choir is the adult group featured in the third episode of this season. I hadn’t previously heard of them, but it turns out they are based out of our town. (Stay tuned for news of a concert planned in Southborough this June.)

The professional group of 22 musicians performs mainly in the Metro West area:

Labyrinth Choir presents present theme-based concerts that include songs in many languages and encompass a wide variety of repertoire including Classical, contemporary, Broadway, jazz and traditional music from different cultures. Labyrinth Choir has toured Europe twice. They recently received the 2018 Alfred J. Patterson grant from Choral Arts New England in order to perform a concert of songs celebrating world unity in the spring of 2019.

Based on the contributed photo, it looks like only 16 of them participated in the competition in February. That performance is finally set to air this Friday, April 26 at 8 pm on WGBH channel 2. Below is a quick trailer with a sneak peak:

Finalists for the finale won’t be revealed until episode 6 in May, but we can likely get a feel for their odds based on the judges’ comments in the episode. You can also check out their competition from the first two episodes on the website. (Plus, I expect this episode will pop up on the site within the next week.)

I would like to know where you are performing next, and what type of programming you will be doing. thanks very much. Ruth