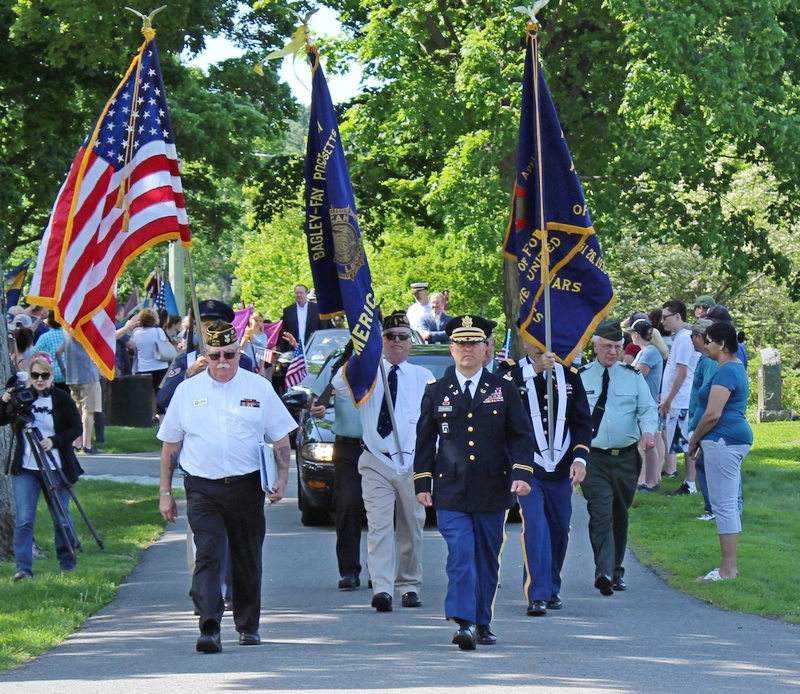 Above: Southborough scouts were among those who honored fallen soldiers on Monday morning (photo by Beth Melo)

Over the long weekend, the town held its annual Memorial Day Services. Below are some shared images from the events.

On beautiful Monday morning, a crowd of Southborough residents turned out to honor the town’s veterans and remember those lost in battle. The annual Memorial Day parade passed through downtown and then wound its way to each of the town’s cemeteries and war memorials. As usual, the parade was made up of veterans, officials, bands, and scouts.

Some residents waved the marchers on and others marched alongside or behind.

While the beautiful day and bright colors signified happy spirits – at each stop, residents were reminded of the solemn reason for the ceremonies.

The most emotional moment came in a speech by Selectwoman Lisa Braccio. She spoke of the ultimate sacrifice that others paid to protect our democracy. Braccio recalled the 2006 killing of a a US Marine. Sgt. Matthew Fenton died the same day that residents of Southborough shipped him a package through one of the troop drives she organized.

At Memorials, tribute was paid to Southborough residents killed in battle, from the Revolutionary War through recent conflicts. Names were read, prayers were said, speeches were given, a gun salute was fired, and Taps was trumpeted.

In keeping with long tradition, a Trottier 6th grader (Calla Torres) read the Gettysburg Address and a Southborough veteran (Ray Minucci) recited Flanders Field. At the final stop, the All Wars Memorial on the Common, the speeches included honoring two Southborough residents.

American Legion Commander Dan Kolenda presented a certificate to Gino L. Tebaldi for 60 years of membership in Legion post 161. (Tebaldi even served as a post commander in the past.) And Commander Steve Whynot presented the VFW’s thank you to Troop 1 Boy Scout Andrew Zalev who coordinated the Eagle Scout project to replace the flag poles at the All Wars Memorial.

The ceremony concluded with musical tributes. Algonquin’s Camarata singers performed and the combined Trottier and Algonquin bands played a rousing rendition of the national anthem.

(You can find out more about the soldier in an old My Southborough post and this geneology website.)

According to Whynot, the flags lining Main Street were placed by the Phaneuf family. He also credited them with the upkeep of the All Wars Memorial.

My thoughts go to Colonel John Wilson’s and Jim Adams family this Memorial day both suffered from injuries suffered from their service to our country.