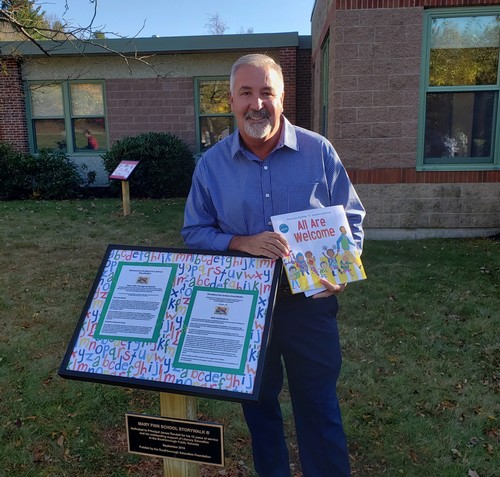 Above: Former Principal James Randell was honored by another StoryWalk® dedication. (image cropped from contributed photo)

Last June, I previewed that Finn School would be opening a StoryWalk® this fall, thanks to work by a Southborough Scout, former school librarian, and the Southborough Education Foundation. Yesterday, the school held the grand opening for the display. As was done at Woodward last fall, the ceremony included a dedication to former Principal James Randell.

The new displays will be used by Finn classrooms, but are also open to the public when school isn’t in session.

The initial story on display is “All Are Welcome”. The book was selected to reflect the inclusive ideals embraced by the former school leader.

Here is the school’s announcement:

A permanent StoryWalk® has been opened at the Mary Finn School in Southborough, honoring retired principal James Randell for his 12 years of service to Southborough students and his dedication to literacy education. The grand opening ceremony was attended by members of the faculty of the Mary Finn School, many who served under Mr. Randell, members of the Southborough Education Foundation, and district staff. The initial book installation is All Are Welcome written by Alexandra Penfold and illustrated by Suzanne Kaufman.

The opening was hosted by current Mary Finn School principal, Clayton Ryan, and Literature Specialist, Lori Winer. The theme of the dedication centered on how Mr. Randell helped to make both the Mary Finn and the Woodward Schools so welcoming and inclusive for all learners and their families in the Southborough Community.

StoryWalk® combines literacy with physical activity. It is an innovative way to get people of all ages outside to read while getting a little exercise. The StoryWalk® Project was created by Ann Ferguson, of Montpelier, Vermont, and developed in collaboration with the Kellogg-Hubbard Library and the Vermont Bicycle and Pedestrian Coalition in 2007. StoryWalk® is a registered service mark owned by Ms. Ferguson. In the 12 years since its inception, StoryWalk® have spread to all 50 states and more than 12 countries.

According to retired library teacher Jean Donlon, who first brought the concept of StoryWalk® to the Southborough Schools, “StoryWalk® is a great addition to schools. We expect students to be engaged in literacy for substantial parts of every school day. Since young children also need to move their bodies, StoryWalk® allows them a chance to get a little fresh air and exercise as they enjoy a good story!”

The Mary Finn StoryWalk® was completed thanks to a generous grant from the Southborough Education Foundation (SEF), and was installed by Alexander Forrest, a recent graduate of Algonquin High School and his friends and family as a service to the community, with the assistance of the Southborough Department of Public Works. The SEF grant also included funding for the installation last year at the Woodward School, where Mr. Randell also served as principal.

Members of the community are welcome to visit both the Mary Finn and the Woodward Schools’ StoryWalks® outside of the hours when school is in session.