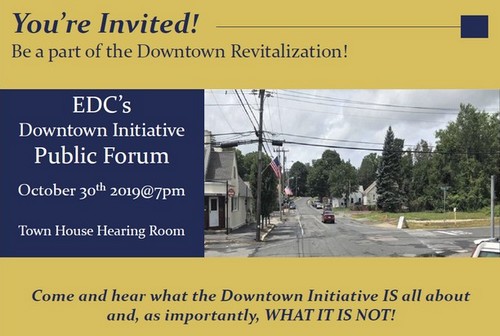 Above: The EDC is promoting public engagement in its efforts to revitalize downtown Main Street. (image cropped from flyer)

The Economic Development Committee is holding a public forum in one week. The subject is the committee’s initiative to revitalize downtown Main Street.

The forum takes place the night before Halloween – but EDC is definitely not looking for residents to be spooked. In contrast, the committee is seeking to inform and reassure the public about the committee’s initiative efforts.

Come and hear what the Downtown Initiative IS all about and – as importantly – WHAT IT IS NOT!

Expect some of EDC’s news to include an update on a $50K Planning Assistance Grant acquired for the Town from the Mass Executive Office of Environmental Affairs.

Back in May, I wrote about EDC’s efforts to get funding for zoning work related to the Downtown Initiative. The grant was awarded a month ago. At that time, EDC wrote*:

The EDC plans to use the grant to move forward on two crucial issues that are currently prohibiting viable economic activity in downtown Southborough. Namely, antiquated zoning laws and insufficient wastewater management infrastructure.

The EDC will hire a professional consultant to assist with updating the current zoning laws with a mixed-use overlay district for the DBVD. In addition, an engineering wastewater feasibility study will be conducted that builds on the wastewater pre-feasibility study already conducted in-house.

The EDC Public Forum is scheduled for Wednesday, October 30th at 7:00 pm in the Town House Hearing Room. At it, the committee promises to answer all of your questions, including:

It appears that last question isn’t simply rhetorical. Committee members do hope residents will be interested in helping. The flyer advocates:

*The EDC issued a press release in September, announcing the EEA grant award – I just didn’t around to posting the news until now. You can read the full release here.

Talk about the pot calling the kettle black? The EDC Chair and its members negatively down talk elected officials (Planning Board) who actually have authority on Zoning, while they ask for the public’s “help” and “constructive” participation. And simultaneously horn into territory of which they have no authority whatsoever, and while consulting with developers. “Antiquated Zoning Laws?” Says who? EDC? Developers? The public is now invited versus the closed door ULI sessions at St. Marks.

“How Can You Help?” is a loaded invitation. And “What’s Wrong With Downtown?” is a loaded question. The EDC should stick to its own actual mission. That’s not soliciting grants to go re-write zoning and shove it down the Town’s throat.

Also, shame on the BOS members who awarded the Special Municipal Employee status to the Economic Development Committee at the last BOS meeting, in violation of the very same policy. Two BOS members, Ms. Braccio and Mr. Stivers did not vote in favor of giving the SME status to the EDC. It is important for the citizens and stakeholders to know that someone is looking out for their interests versus the EDC and the developers.

EDC, like it or not, is involved in zoning. It is not their legal authority. But that isn’t going to stop them from running roughshod over the residents interests.

They are attempting to draft zoning anyway with their new grant. Watch the ball go down the field, without the residents even understanding what is happening. So, low and behold (!) — here’s another forum to shove the loaded questions down the public’s throat.

On a separate note, by the way, did you hear? St. Marks is buying up houses on Main Street in the vicinity of their newly acquired former police / fire stations. Smells like an ASSEMBLAGE. Call it a hunch but this feels like someone (and not the committees and Boards with the actual legal authority) is master planning without the Town people. The potential to wreck downtown with traffic volume, congestion, density is real.

Just one opinion, but the EDC crybabies may well appear at the next town meeting looking to convince the public with their negative down talk about Planning Board and those actually charged with the task. This EDC should be disbanded. They exceed their authority and bully elected officials and others. And here comes another P.R. session selling their loaded message. They have it dead backwards: They serve the town and its residents — not the other way around — getting the public’s “help” and buy-in to their on-a-roll redevelopment scheme. They completely miss the mark: they should focus on their actual mission statement: to attract business into Southborough and stop the businesses from going to nearby towns. What is their actual track record on the one thing they are supposed to be doing? Not terrific.

Again, based on their actual track record, they should be disbanded. Not another tax dollar wasted.

Just a couple of clarifying points to the remarks above:

First, the closed door session of the ULI Study was for Downtown Residents ONLY (actually, there were 2 sessions, one for Downtown Residents and one for Southborough business owners, with Dowtown Businesses invited first). The point of closed-doors was to exclude officials and allow residents and business owners to speak candidly. This is detailed in the ULI Study that was published on this site a while back.

St. Mark’s creeping growth is all the more reason a practical, thoughtful vision for downtown is needed, but more than the vision, we need people who can implement it and protect the space. That’s what proper zoning does. That’s what has been recommended by study after expensive study that have sat on shelves. Time to act.

The downtown revilitization is dead on arrival with the current planning board – (in fact I would refer to it as a stopping board) the planning board has zero interest in planning and 100% interest in stopping anything unless you genuflect to Freddie Gillisepie (a de facto board member) and the two female members of the board. Their sole interest is native plantings- not planning , not economic growth, only punishing every applicant that goes before them unless they play the native spieces ballgame. The chairman has been emasculated by these three people and has lost control of the board. They are right however in suggesting disbanding the EDC as regardless what is proposed by the EDC its dead on arrival . Until the planning board is 100% turned over with coherent respectful members that want to plan and move the town forward the pathetic downtown you see will remain for our lifetimes. Too bad they don’t see the progress in Hudson and Marlboro downtowns which are experiencing a huge revitalization but instead they are misguided zealots with bad and disfuntional agendas

While reasonable people may disagree on policy issues, I hope we can all agree that this site should not be a forum for anonymous users to make personal and blatantly sexist remarks against public officials and community volunteers.

0
Lucy
Reply to  Just the facts

Wow! How does this make it through. Curious if you have any idea of what the schools in Marlboro look like right now? Unless you’re at amsa it’s not a place to be. I don’t think we want to plan Southboro like Marlboro plus we don’t have the road system to do it. Hudson has existing structures and miles of downtown nothing like Southboro. You sir are an uninformed disgrace. We should never want to make Southboro into Marlboro, Hudson or Framingham to appease developers and interest of EDC members. People come to Southboro for the schools not overpriced housing, no town services and high taxes. Here for the schools period. Screw that up kiss the value of your million dollar homes goodbye nobody will want to be here. Put up a few retail shops but not apartments. Good day!

0
Master Plan Without the Town

Downtown is for all residents and impacts all residents, not some. An EDC closed door meeting is closed door. It is unacceptable and ridiculous that ANY public town business by A TOWN COMMITTEE (!!) be conducted behind closed doors with public officials (?!) and members of the public at large shut out. This is ludicrous. EDC should be disbanded for those reasons alone. Can you imagine any other board or committee doing this? It leaves the public wondering is this an Open Meeting Law violation?

Also, Planning Board did not initiate asking EDC to “look at zoning changes.” Zoning is Planning Board’s sole authority. It was only after negative down talk by the EDC chair did Planning Board agree to look at whatever EDC produces on its own. The above “spin” on “direction” is spin.

The voters should be on high alert for “spin” and advice from the EDC. The EDC has no authority on zoning and should stay within its boundaries. Now the EDC has Special Municipal Employee status, all while working on zoning and the “Downtown Initiative.” This is a high alert and caution situation for all residents.

Master Plan Without the Town – your outrage is misinformed. There was no “EDC closed door meeting” and your open meeting violation law accusation is just plain wrong. The ULI Study, which has been performed in many cities and towns, has a process that includes a closed-door meeting with residents to allow them to speak candidly. EDC was not in the room, it was simply to make sure all voices were being heard and concerns addressed. There couldn’t have been an open meeting violation because EDC was not even there. At the end of the day, a public form was held where all members of the public were invited to learn about ULI’s preliminary findings.

You’re right in that zoning is under Planning’s authority and that Planning Board likely would not have initiated zoning changes without EDC’s urging. But that’s the point, Planning wasn’t doing anything to protect Downtown from being eaten up by St. Mark’s and had no plan for improvements that people want, all of which could be controlled with zoning. I commend Planning for delegating to EDC if they weren’t going to do anything about zoning themselves.

0
Master Plan Without the Town

Claryifying again — EDC brought in ULI. ULI is an organization of fee based professionals, including attorneys, architects, brokers. As for the process, the meeting closed out the public at large. Also public officials see shut out. So certainly, not “all voices were being heard.”

You are misinformed. Planning did not delegate anything, especially zoning, to EDC. They do not have the legal authority to delegate zoning to EDC. They simply took a vote to have the EDC come forward with their own work product. No one has to incorporate that into anything or agree with EDCs skewed views. Especially while they try to have their cake and eat it too.