As you probably know by now, Joe Biden won yesterday’s Democratic primary in Massachusetts. Looking at the important delegate counts as of this morning: Biden captured 52%. Elizabeth Warren only got 4%. That was double Michael Bloomberg’s but a distant third behind Bernie Sanders’ 42%.

But who did Southborough voters cast ballots for? And how many voters took part in the primaries?

Here’s my look at how our town weighed in. One factor that’s worth highlighting is the difference between early voting and Super Tuesday results.

The results don’t track what parties they belonged to, just which primaries they voted in. (Remember, 60% of voters in Southborough are unenrolled in a party and can choose their ballot.) Still, the numbers offer some understanding of which race unenrolled voters selected.

Voters on the Democratic ballot was 154% compared to the number of registered Democrats in Town. Based on the pool of voters who could have participated, turnout was only 43%.

Predictably, the Republican turnout was lower. Ballots were 48% compared to registered party members or 9% of voters who could have participated.

Joe Biden did capture the most overall votes here. But Warren had a stronger showing in Southborough. She came in in second overall, ten votes ahead of Sanders.

Results were fairly consistent across all three precincts. (The only anomaly was minor. Sanders did outperform Warren by 9 votes in Precinct 3.)

Here’s a snapshot of the overall results: 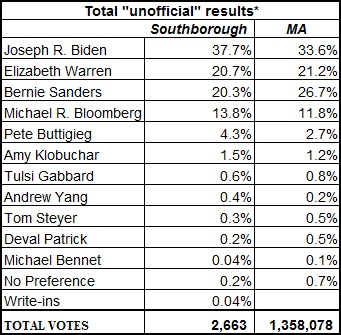 17% of those who voted in Southborough’s Democratic Primary voted early. (That doesn’t count Absentee Ballots. Those were tabulated as part of the regular voting totals for yesterday.) Those votes were cast before Biden’s strong showing in South Carolina prompted three candidates to drop out and endorse him.

Among early voters, Biden was only 5th place in Southborough. Warren held the lead. That broke down to: 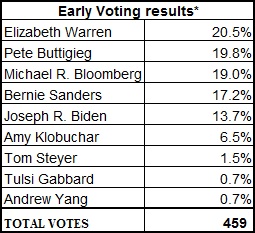 The Southborough results weren’t significantly different than the state. Since only 83 voted early, and there were no significant developments to change outcomes, I won’t bother with an early voting table. But I can tell you that the early voters skewed a little better for former Governor Bill Weld (with 18%) than the overall tally. Here are the overall votes compared to the state:

The real contest on the ballot was for who would represent the Middlesex & Worcester District on the State Committee. I don’t have the results for the entire district, but here are ours: 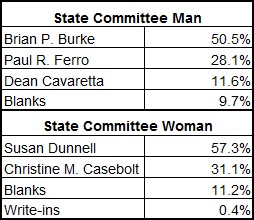 Only 13 voters showed up for the 3rd party ballots. 12 of those were for the Libertarian ballot. The majority (five) voted for Vermin Love Supreme. (You just can’t make this stuff up!) Remaining votes were split, including write-ins.

*The figures that I’m reporting are from the Town Clerk’s “unofficial results”. They still need to be certified by the state. Statewide results are based on the numbers that have been publicly reported by the media as of this morning.