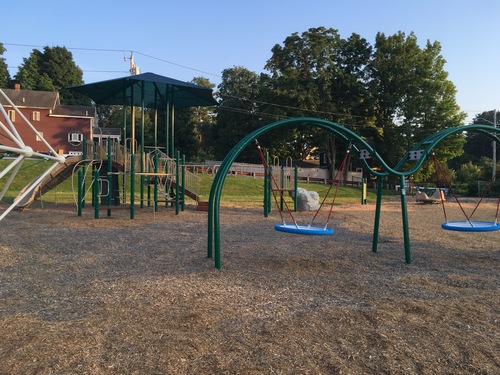 Above: Southborough playgrounds have been off limits for months. That changes a week from today. (image edited from Google map of Finn School)

On Saturday, the Governor announced that Phase II would begin this week. Today, Southborough Recreation issued an update on its facilities under the new phase. The guidelines allow for more recreation facilities to open and additional uses, beginning on Monday, June 15th.

It includes updated rules for playgrounds, sports and more.

It’s worth pointing out the Town’s caveat. Any of these reopenings may be rolled back if the rules aren’t being followed or based on local health data.

Below are the broad strokes on what is changing and what is still off limits. Important details are in the Town’s announcement which includes the state guidelines. (Safety guidelines about distancing and facemasks still apply.)

Playgrounds reopening on Monday include both Town and school properties. The one exclusion is the small playground on Common Street by the Town Hall. (It is currently under construction to be ADA compliant.) We are also warned that the equipment will not be sanitized on a regular basis.

Organized sports can resume some field use

In other good news for many families, organized sports will be allowed to begin using the playing fields. But, it looks like the use will be limited to practices or clinics during this phase.

The state guidelines still prohibit intra-team competitions. (No games or scrimmages and no use of refs and umpires.) Those limitations are on “contact-sports” which covers basically every group that uses our fields.* Players and facilitators are asked to keep distances and spectators are limited.

Any organized use requires the usual field permits. It looks like (except for 9/11 field), non-organized users can still drop in to play when the fields aren’t in use.

Depietri Field is still under construction. Fayville field will undergo construction but that date is still TBD.

Town Tennis courts were already open. Now the rules will relax a little. Four players will be allowed per court and there is no restriction that they come from the same household.

The pavilion at Fayville playground is also reopening for organized use by permit (birthday parties, etc.)

The beach volleyball court at Neary will be reopened for drop-in play.

For now, the Town is still asking the public to follow a “Carry In, Carry Out” policy for trash. Public restrooms and porta potties will not be available.

*Contact sports are defined by the state as including the examples of football, baseball, soccer, field hockey, lacrosse, hockey and basketball. Rugby would definitely also be considered contact. I can’t think of any organized sports that use our fields that wouldn’t be considered contact.

Updated (6/9/20 7:57 am): Initially, I didn’t know if the sand volleyball court was reopening. Rec Director Tim Davis responded that he will have the net put back up.