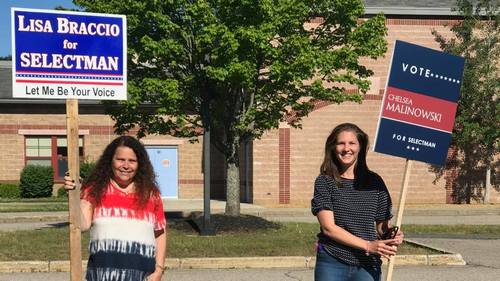 Above: Lisa Braccio won her re-election bid to Southborough’s Board of Selectmen. She’ll be joined by Chelsea Malinowski. (image from Facebook)

The results of yesterday’s Town election are in.

In the biggest race, Lisa Braccio will keep her seat on the Board of Selectmen. (Scroll down for her thank you message.) The second seat goes to Chelsea Malinowski who has been serving on the Advisory Committee. She will replace outgoing Selectman Dan Kolenda. (Kolenda has served on the board since 2011. He didn’t run for re-election this year.)

Peter LaPine had also been running in the three way race for the two seats. Braccio was supported by 85% of voters, Malinowski by 65%, and Peter LaPine by 27%.

Only 609 voters participated in the Town’s election.

That’s 8.2% of registered voters in town, about half the turnout for last year’s election.* Of those who voted, over 60% cast their ballots by mail.

Voters who wrote-in names for blank ballot slots determined one race and appointed a candidate who I was never aware was running.

There was a public write-in race for the Southborough seat on the school committee for Assabet Regional Technical High School. Dan Butka won the seat with 113 votes.

Butka replaces Mark Pietrewicz who has been serving in the role since last spring. Pietrewicz had hoped to keep the seat but didn’t file papers this spring to be on the ballot. (The filing deadline was March 24th, after the Governor declared a state of emergency.) Pietrewicz received 50 votes.

Butka is the son of a longtime member of the committee for Algonquin Regional School Committee, Paul Butka. (Scroll down for more on that race.) The new representative announced his write-in candidacy in late May.

The surprise win was on the Southborough Housing Authority. Jack Barron, who hadn’t publicly announced an intention to run, won a seat. Barron is in the midst of an unrelated lawsuit against the Town.

Only one candidate, John Wood, was listed on the ballot for two seats representing the agency. Wood kept his seat with 472 votes. Barron received 7 write-in votes. It appears another 9 votes were split among “others”. Barron will replace outgoing member Marianna Surette.

Bill Boland asked for and got write-in support to keep his seat on the Board of Commissioners of Trust Funds. (He also failed to file papers for the election deadline this year.) Boland received 36 write-ins versus 15 to “others”.

The election of candidates for the Northborough-Southborough Regional School Committee can’t be officially determined until Northborough’s Town Election is complete. That is scheduled for June 30th.

Current members Paul Butka and Paul Desmond are the only candidates for the two Southborough seats. (Technically, they aren’t re-elected yet. But there’d have to be quite a write-in campaign to unseat them.) Butka received 466 votes and Desmond 449 in Southborough’s election.

[Editor’s Note: The results are in. See update below.**]

The remainder of the ballot was uncontested candidates. All secured their seats. (To see those names, click here.)

*This year’s election was clearly different for many obvious reasons. But there is one I feel is worth pointing out. Unlike in past years, The Metrowest Daily News and its Wicked Local never ran articles on this spring’s Southborough’s election or posted candidate statements for the BOS race. (At least not any that I could find.) That could have contributed to lack of awareness and interest in this year’s election. Hopefully, that was just this year due to the current state of the world. I’m hoping it’s not a trend that will continue in future years due to slashed coverage of our region.

I would like to thank those that voted by early ballot and who showed up yesterday to vote. I am truly humbled and honored to continue to serve you and the Town for next 3 years. I don’t take the trust you have put in me lightly and I will continue to always be available to you, work hard for you and know your voices at Town Meeting were heard.

Congratulations and welcome to our new Selectman Chelsea Malinowski. I look forward to working with Chelsea and continuing to make positive change, the Town will be well served by her dedication and diligence.

And lastly thank you to Mr. Peter LaPine for running and creating a choice for the voters, I hope that he will take his desire to serve and look at some of the other vacancies on Boards and Committee, where he can make a difference.

Again, thank you for your continued support and I am excited to jump back in and work for you the next 3 years.

I would like to take this opportunity to extend my thanks to those Southborough voters who both made the effort to vote in the 2020 municipal election and particularly those who supported my campaign for a seat on the Southborough Board of Selectmen. The encouragement offered and sincere conversations held with old and newly made friends are greatly appreciated!

As widely anticipated, Lisa Braccio retained her position with the Board, and is now joined by Chelsea Malinowski, who also has several years of experience in Town government. Congratulations to you both!

Updated (6/18/20 7:44 am): Peter LaPine pointed out that in the story, I miscapitalized his name. (He also asked me to make a small edit to his comment above.)

Congratulations to all the candidates who took part in the local Southborough election yesterday. And thank you to all of the residents who took the time to vote via mail in or in person. I am grateful for the confidence you have in me to do great things for the town of Southborough. I look forward to serving you for the next 3 years.

We are fortunate to have Lisa Braccio serve again. She has brought leadership and been extremely dedicated to make the best decisions for Southborough. Congratulations to her for a successful first term and I look forward to working alongside her for the residents.

Thank you to Mr. LaPine for stepping up to run.

Thank you so much to the town of Southborough for electing me as the newest member of the Assabet Regional School Committee! I am eternally grateful that the residents of my hometown trusted me with this position, and I am excited to try to make a difference. My hope is that I can make an immediate impact on budget oversight and return to school planning, while I plan to bring a fresh perspective to topics that I am passionate about (mental health awareness, inclusion initiatives, opioid addiction prevention, etc). My first job is to listen, and I couldn’t be more excited for this journey.

Thanks to Mark Pietrewicz for a great campaign and all of the work he has done so far for Assabet. I hope to continue that work during my tenure on the Committee. I am especially appreciative to Beth at mySouthborough.com for all of her work covering the election and for providing us with a forum to speak to our voters.