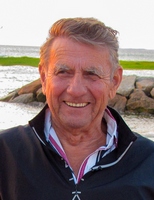 John Mauro, 88, a life-long resident of Southborough, passed away peacefully on Saturday, August 8, 2020 at his home surrounded by his family.

He was the beloved husband of Ann “Connie” (Gennari) Mauro for over 63 years and was the son of the late Joseph and Lucy (Pessolano) Mauro.

John graduated from the former Peter’s High School in Southborough, class of 1950, and is a U.S. Army veteran, serving in Germany from 1952-1954. He worked at St. Mark’s School for 58 years, retiring as head of the grounds department. John proudly served Southborough as a call firefighter for 50 years retiring at the rank of Lieutenant, and was an elected member of the Board of Cemetery Commissioners for eight years. He was a past member of the Southborough Firefighters Association and the Fayville Athletic Association.

John was known by those who knew him as a hard-working, giving, caring and selfless person willing to help anyone. A quiet man, John, had a quick wit, and when he did speak he always had a funny comment. He had a great sense of humor and loved playing practical jokes on his friends and grandchildren. John was a talented craftsman and loved working with his hands tending to his garden and flowers all around his yard; building and repairing boats, and making wooden furniture for his family and friends. His happiest moments were spending time with his family and friends during celebrations, holidays, and around the swimming pool.

John is survived by his three sons, John, and his wife Ellen of Northborough, Richard and his wife Heather of Salt Lake City, Utah, and Joseph and his wife Wanda of Shrewsbury; as well as his six grandchildren: Vincent, Victoria, Ian, Connor, Mark, and Christian. He leaves his brother William and his wife Connie; his sisters-in-law, Angie O’Toole, Rheta Gennari, and Rose Camden and her husband Owen, and many nieces, nephews, and cousins.

John is pre-deceased by his brother, Calvin, and his wife Sylvia.

Visiting hours will be held on Friday, August 14, from 4 to 7 pm at the Morris Funeral Home, 40 Main Street, Southborough.

A private funeral Mass will be held on Saturday. Burial will be in the Southborough Rural Cemetery.

In lieu of flowers, memorial contributions may be made to VNA Hospice, 120 Thomas St., Worcester MA 01608, or via www.vnacare.org/donors.

Arrangements are under the care of the Morris Funeral Home, 40 Main Street, Southborough. To leave words of condolence to the family, please visit www.morrisSouthboroughfuneral.com.

Dear Ann, and family,
As a resident of St. Mark’s, where my husband Jay was a teacher for many years, I have many fond memories of the Mauro family, so much appreciated as part of the Southboro scene. John’s sense of commitment was impressive! One night when the snow was very deep, Jay didn’t arrive at home as I expected, after library duty. Although it was late, I decided to call John to see if he could take the snowplow out to see if Jay was in trouble. He responded immediately! When I dropped off some brownies as a thank-you to John the next day, he said”You didn’t have to do that!” It was all in a day’s work, for him. It’s good to be remembered as such a reliable person.
With much sympathy, Diane