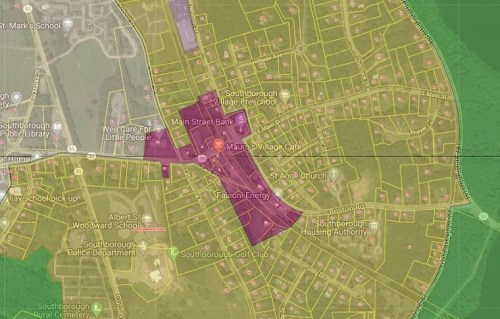 Above: Town officials are working on plans for a bylaw to revamp zoning in the downtown section of the Business Village zoning district. (Image above cropped from the Town’s GIS map.* The focused on district is highlighted in dark pink.)

Next week, multiple Town boards will discuss status and next steps for a proposed Village Mixed Use Zoning (VMUD) bylaw. The Board of Selectmen, Planning Board and Economic Development Committee will hold a joint meeting on the topic.

Work to pursue revamped zoning in the downtown section of the Business Village is a key part of EDC’s Downtown Initiative. The committee has asserted that improving zoning to attract the right development is critical to “revitalizing” the downtown Main Street area.

A touted element of zoning changes is allowing mixed-use properties with street level commercial uses and upper floor residential units. The EDC is also advocating streamlining the approvals process for the district.

The committee hopes to have an Article ready for voters to approve at the next Annual Town Meeting. Since zoning changes can be controversial and require a 2/3 approval, the EDC will be seeking advance support from key “stakeholder” groups in Town.

Last week, selectmen discussed the upcoming October 6th meeting. The board agreed to extend invitations for other stakeholder committees to join them. Those include the Open Space Preservation Commission, Trails Committee, SHOPC (Southborough Housing Opportunity Partnership Committee), and SCAC (Southborough Cultural Arts Council). But, BOS Chair Marty Healey warned that the committees may not get a chance to chime in that evening. Healey explained that he expects selectmen, EDC and Planning to have a lot to discuss.

Last week, Consultant Claire Reynolds laid out a projected timeline for EDC to prepare for ATM. She targeted mid-November for Selectmen to approve Article language. That would allow them to prepare for the Planning Board to open a Public Hearing in mid-December. More hearings would be held in January, and (if necessary) in February. If issues raised in hearings require it, there would be time to revise the bylaw for selectmen to approve a final version before the Town Meeting at the end of March.

Meanwhile, as of last Thursday, EDC’s Coordinator Marijke Munsiff indicated she was worried they may not have everything they need for a productive meeting on Tuesday night. EDC was still waiting for “performance standards” from their planning/zoning consultant Judi Ballard. Munsiff pointed out that the EDC and other boards need to hash through details of the proposed bylaw changes, not waste time revisiting why they are pursuing them.

Among discussion topics next week will be the strategy for implementing zoning changes.

The EDC was seeking to create an “overlay” zoning district to specify special rules for the one section of the already defined defined Business Village district.**

Recently, Ballard publicly recommended that it would be simpler to submit a bylaw for a new zoning district. EDC’s Julie Connelly said she followed up with her. Reportedly the consultant isn’t fully committed to that strategy and is willing to consider the overlay route. The third optiong,previously scrapped, is revising the Business Village zoning bylaw. (EDC didn’t believe that extending changes to the other two sections of the Business Village would “fly” with voters.)

Last winter, the EDC’s plans to bring a zoning bylaw to 2020 ATM was derailed by process and preparedness issues. EDC hadn’t followed the necessary legal procedure for getting a zoning bylaw in front of Planning and missed a window.*** But other Town officials, like members of Advisory, advocated that a delay to a Special Town Meeting in fall would be a better plan anyway. Advisory Chair Kathy Cook pointed out that given the threshold for approval, more work was needed before the Article would be ready. In the end, plans for the Special Town Meeting this fall were eliminated due to issues around the pandemic and logistics.

Following the postponement last spring, Reynolds publicly pushed selectmen to step up and help the EDC get the bylaw done. Selectmen pledged to take a more active role in supporting the committee’s efforts and bringing parties together.

As of their last meeting, selectmen were targeting 7:00 pm on Tuesday, October 6th for the start of the joint discussion with EDC and Planning. (When posted, the BOS agenda for that night may begin their meeting earlier.)

*The GIS Map image is based on the linked coordinates, with “layers” for zoning and Google’s Hybrid map selected.

**The Business Village also covers an area around the intersection of Route 9 and Central Street and a segment of the southside of Southville Road from Fitzgerald Store’s parking lot to Pizzaville. The downtown section covers an area of Main Street, Park Street, Newton Street, and Boston Road. You can get a better look on the Town’s zoning map here.

***The EDC lacks legal standing to present a zoning bylaw to the Planning Board for hearings. Selectmen are able to accept the EDC’s recommendation for the bylaw and transmit it to Planning. (Planning has also partnered with others in the past to bring forward zoning bylaws under their authority.) Last winter, when the boards were informed of the issue by Town Counsel it was too late. But officials also publicly opined at that time that the bylaw didn’t appear to be ready for primetime.

Can I assume there will be a video of this meeting?