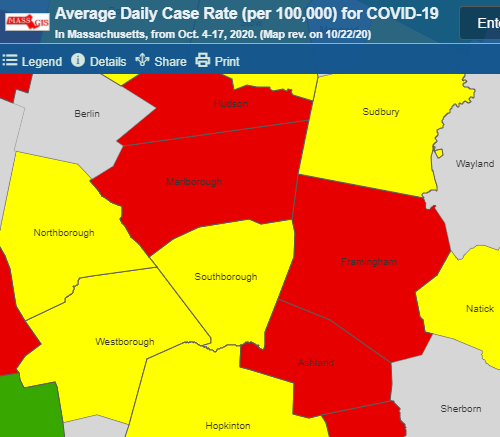 This week, the state’s report reflects the progress Southborough made in keeping Covid numbers down. The Town is back to yellow. The change is based on only 9 confirmed cases from October 4th-17th.* In even better news, only one case has been confirmed in the past 7 days. (At this point, six active cases appear to remain in isolation.)

The NSBORO District’s news wasn’t quite as good. The current figure is 8 active cases across the district. Three are likely continued isolation of earlier cases noted in Southborough schools (elementary and preschool). The number of infected high school students/staff rose. But it’s apparently more contained than it appears.

A message from the Superintendent indicated that three district cases were from one household. Those patients hadn’t been in the schools since October 9th. No close contacts were identified. The message defines close contacts as people “who have been within 6 feet of distance of the individual for a cumulative total of 15 minutes or more over a 24-hour period starting 2 days before illness onset (or, for asymptomatic patients, 2 days prior to test specimen collection) until the time the patient is isolated.”

Below are the district’s latest dashboard graph and my updated graph tracking Southborough.

*I admit to being surprised. I knew that as of Monday we technically moved back below the threshold for red. But state reports are for 10/4 – 10/17, for which I tracked 16 cases newly confirmed. That leads me to believe that seven cases reported by the Town website “as of” October 5th were considered by the state to be new cases on or before October 3rd. (I’m not sure if that relates to a communication gap or if the state is basing data on the dates that tests were administered rather than when results were confirmed.)

The definition of “close contact” has been changed by the CDC. It is now as follows, having been changed on 10/21/20.
“The CDC had previously defined a “close contact” as someone who spent at least 15
consecutive minutes within six feet of a confirmed coronavirus case. The updated guidance, which health departments rely on to conduct contact tracing, now defines a close contact as someone who was within six feet of an infected individual for a total of 15 minutes or more over a 24-hour period, according to a CDC statement Wednesday.”