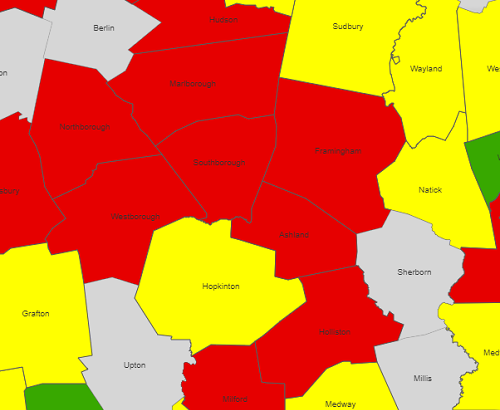 Above: While cases in NSBORO schools are down, the number of recent community cases has both Southborough and Northborough among high risk towns. (image from mass.gov)

Southborough’s total cases of Covid-19 reached 85 this morning, then 87 this afternoon. It marks 14 new cases confirmed in the past week, by far the biggest spike throughout the pandemic.* The state’s weekly report posted last night reflects Southborough’s return to the red/high risk zone.

Currently, only 7 people are in isolation.

Given that patients need to be isolated for at least 10 days, I was been confused by the continued reports of of new cases while “active” cases remained at 6 or 7 for a stretch. I reached out to Southborough Public Health Nurse Emily Amico. She confirmed the Town’s numbers are correct.

Amico clarified that the isolation period is at least 10 days from a positive test for asymptomatic patients. But for others, that period is dated from the onset of their symptoms:

There is sometimes a delay in the lab results returning to confirm that an individual is in fact positive and some people are sick at home for days before going for a test.

As for patients’ release from isolation – they must have improved symptoms and be fever free for at least 24 hours.

The NSBORO District’s dashboard indicates the number of active cases are down to 3, all linked to Algonquin. Six students/staff are in quarantine due to in school contact.

As of last night’s report, there were no more quarantines in the lower schools due to in school contact. Almost 30 people are quarantined due to contacts outside of school (19 of those are high school students/staff). Additional travel related quarantines are shown.

Below are the district’s latest chart and my  charts updated with this afternoon’s data.

*Of course, testing availability was much tighter in the spring. I can’t fairly compare test positivity rates for spring cases versus fall. The state didn’t begin specifying the positivity rates over 2 week periods until mid-summer.

Updated (10/30/20 4:09 pm): The Town updated the figures again with two new cases confirmed. I updated the stats and my charts above.

Speaking again with Nurse Emily Amico, I also got some more clarification on apparent discrepancies in the state’s weekly reports.

I noticed that figures often didn’t seem to add up week to week or correlate with the timing of cases shared on the Town website. She clarified that the totals listed each week are based on the numbers when the report is run (Wednesday mornings). Community risk assessments cover an earlier window (looking back 14 days from Saturday). Those figures are based on the dates the samples were taken for testing, not the dates they were confirmed. Occasionally, there are other issues that impact figures. For instance, the state initially includes people with Southborough addresses that aren’t living in town (e.g., college students), then corrects and removes cases in a subsequent week.