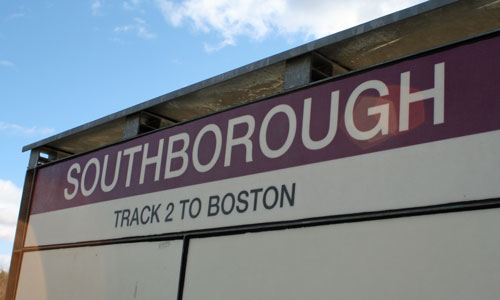 Above: Commuters who ride the rail from the Southborough station will have a chance to hear more tonight, and submit feedback. (Image by Susan Fitzgerald)

Yesterday, the MBTA announced proposed service reductions, including to the Commuter Rail, due to decreased ridership. Tonight, the public is invited to take part in a virtual meeting for our region.

For the Commuter Rail, service cuts would start “mostly in May 2021” but with some imapacts sooner. For our line, it would mean:

The general announcement for commuter rails states that “Service levels by line will take into account ridership patterns.” In an MBTA map indicating impacts by line, the impact to trains on the Worcester-Framingham lines stopping in Southborough is designated as “Below baseline levels of service possible”.

The service changes are based on reduced use caused by the pandemic and economy:

The Commuter Rail is experiencing approximately 13% of its pre-COVID ridership, with about 8.5% of its normal ridership during morning peak periods.

So, what if ridership picks up in the coming months? The MBTA website notes:

The [proposed] changes are based on frequency standards in the MBTA Service Delivery Policy. We’ll review and adjust these changes regularly as part of the quarterly Service Planning process.

A liaison from the MBTA reached out to ensure that the Southborough community got the word on the changes. He shared the agency’s press release and advised:

To learn more about the specific service changes impacting your local area, please visiting the Forging Ahead website: https://www.mbta.com/forging-ahead and I also encourage you to read the open letter to MBTA riders from General Manager Steve Poftak by clicking here.

The website includes details on tonight’s meeting over zoom from 6:00 – 8:00 pm. Click here to register for the session dedicated to Region 1. (That covers 52 towns including Southborough. See map right.)

Forging Ahead: Protecting public transit for people who need it now.

Challenged by unprecedentedly low ridership and lost fare revenue, the MBTA is facing a historic moment.

The T is proposing ideas to realign service to accommodate the transit needs of people using the system today.

Join us for a virtual community meeting to learn more and share your feedback.

A separate link is also provided to a feedback form here.

The changes have already drawn some public expressions of concerns/criticism. The Worcester Telegram reported comments by public figures from the Worcester area:

[ Sen. Harriette Chandler, D-Worcester, state Senate president emerita] was specifically concerned about essential workers and people for whom transit is a necessity.

“As much as the state budget is crunched … individuals’ budgets are also very badly crunched,” she said. “They are struggling, struggling more than the state is at this time. We can’t cut back on people’s ability to get to work or get to the doctors.”

Guardiola noted that the Massachusetts Turnpike between Worcester and Boston is one of the most congested roads in the country. Moreover, other infrastructure projects, such as the Allston Multimodal Project and the Interstate 495 and Mass. Pike Interchange Project, are likely to increase congestion.

“This is a time when instead of subtracting service, we should be adding to get folks off the road and unto public transportation,” Guardiola continued. “We can’t give up on commuter rail because ridership is down for a small time during a pandemic. You need to keep forging ahead.”

Sujatha Krishnan, deputy director of transportation at the Central Massachusetts Regional Planning Commission, said she had a “mixed reaction.”