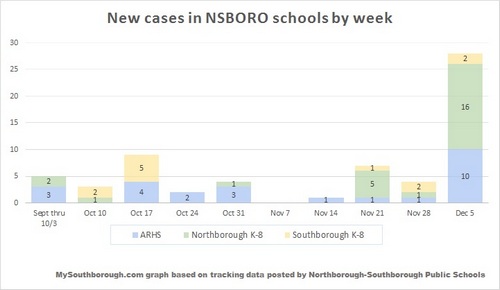 Above: The number of new cases in district school staff/students spiked last week. Northborough K-8 had one potential link to in-school contact. (Click to enlarge)

The Town’s Covid-19 figures were updated again yesterday and the Northborough-Southborough Public Schools updated its weekly dashboard. Below is the latest, including my updated graphs.

Southborough’s confirmed number of Covid cases keep jumping up. In the last week, 40 cases were confirmed, ¼ of the cumulative 160 cases in town. Currently, 49 residents are considered active cases in isolation.

Below are more of my graphs looking at the data trends. It includes a look at the average number of cases confirmed daily over 14 days, and age demographics.

As I posted on Friday, Southborough is currently designated a high risk community.

Across the NSBORO district, there were 28 new cases. That’s more than 40% of the cumulative 67 cases of school students/staff since the start of the school year.

On Friday, a notice from Superintendent Gregory Martineau about a recent Algonquin case continued to note that no cases had been linked to “potential in-school transmission”. It turns out that isn’t the case NSBORO-wide.

Last week, Northborough’s Melican Middle School had a 3 day period of remote learning based on one “likely” case of in-person contact. On November 29th, the administration alerted families that students would be schooled at home temporarily. The email included a return date of Hybrid learning of December 4th.

In the email on Friday December 4th to Algonquin parents, Martineau continued to assert:

If at any point the possibility of in-school transmission has been identified, the school would shift students enrolled in the hybrid learning model to remote learning for a period of time (1-3 days). During the 1-3 day remote timeframe, an emergency school committee meeting would be held to determine the appropriate length of the remote learning model, based on the Board of Health’s recommendation.

Interestingly, in Northborough, when the likely in-person transmission was identified, the district announced the return date to hybrid learning before a school committee meeting was held. At the previously scheduled Northborough School Committee meeting held on December 2nd the agenda didn’t include a vote on that topic. It did include an update on the situation. During the discussion, Wellness Coordinator Mary Ellen Duggan clarified that one of the in-school close contacts of an individual who tested positive subsequently also tested positive.

Answering questions, Martineau indicated that if the administration and health officials determined a longer closure made sense based on details of a future case, an emergency meeting would be held for a vote.

During that meeting, the district updated that NSBORO staff is currently being screened. Staff was tested once per month, with the most recent one Thanksgiving week. One. So far, that only turned up one case out of 564 staff members. They will be testing weekly in December every Friday. Tests are self administered, but under medical supervision.

Across the three districts, 203 students/staff are in isolation/quarantine. The biggest chunk is 115 that are quarantined due to contacts outside of school. Below are the district’s latest graph and an updated version of mine tracking the data since the start of school.

The Southborough School Committee will be meeting this Wednesday. The agenda doesn’t specify discussing results from the recent survey of K-5 parents asking about interest in having children return to school 4 days per week. But it does include the standard Covid-19 status update, so the topic may be covered.

Next week, there will be a Combined School Committee meeting. The agenda has yet to be posted, but I would expect it to include an update on the administration’s research into a Covid testing program that could include students.

As for the recent new cases in NSBORO schools, 16 were Northborough K-8 students/staff, 10 were from Algonquin, and only 2 from Southborough K-8 schools. As of last week, Northborough had a higher average daily incidence rate based on its population, and 82 active cases. Still, in the weekly report issued on Thursday, the state evaluated Northborough to be a lower risk community than Southborough.

Updated (12/7/20 2:51 pm): I had mistakenly believed that a message I received as an Algonquin parent indicated that no cases of in-person transmission had been identified across NSBORO schools. It turns out that a case of “likely” in-school transmission was identified at Melican Middle School that resulted in remote-only schooling for those students most of last week.

Updated (12/8/20 9:04 am): The graph tracking cases including patients in isolation was originally missing the data from Sunday. I replaced it. One more case was confirmed yesterday. To see the more updated stats, click here.