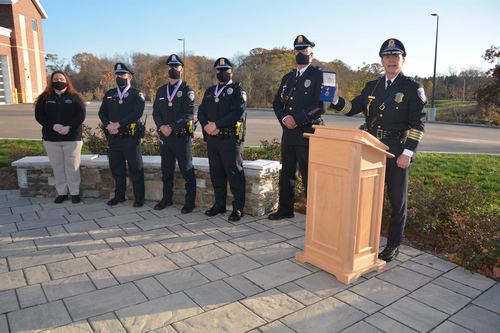 Above: Last month, three members of the Southborough Police Department were awarded the Public Safety Officer Medal of Valor. (photo from Facebook)

This summer the Southborough Police Department was put to the test when one of their own was stabbed on duty. The responses of their officers and fellow public safety personnel were lauded in a ceremony last month. That’s just one of the SPD highlights from the last two months that I’m rounding up in today’s post. Scroll down for those details and other updates.

The 36 pages of activity show the SPD as having made 13 arrests (6 related to alleged driving under the influence). They filed another 10 Criminal Applications following vehicle stops. They responded to two reported burglaries (one from a motor vehicle and another property B&E). They also took 100 reports of larceny, forgery, and/or fraud and 10 harassment complaints. And they responded to 41 motor vehicle accidents.

Prompted by calls of coyote sightings in town, last week the SPD alerted:

We’ve been receiving our annual reporting of coyote sightings in the area, so we just wanted to provide everyone with a helpful link to coyote information from Mass Wildlife. [click here]

* Some quick info. from the site:

“Coyotes are opportunistic feeders, meaning they will feed on whatever is most readily available and easiest to obtain. Their omnivorous diet consists of a variety of foods including rodents, rabbits, deer, birds, insects, reptiles, fruits, and berries. They will scavenge roadkills, rodents, and birds killed by cats, as well as garbage and pet food left outdoors. In suburban areas, they have been known to prey on unprotected pets, including house cats and small dogs.” -Mass Wildlife

The department also reminded the public last month that you can take advantage of their safe zone for exchanging payments for goods:

With the holiday season approaching, we just wanted to remind everyone that we have an Internet Safety Transaction Zone- right in front of the Southborough Public Safety Complex located at 32 Cordaville Road. If you are buying something online through Craigslist, community yard sale sites, etc; we strongly recommend meeting and conducting your transaction here. The area is right in front of the police station, and there are cameras facing this area for added protection.

On November 5th, the SPD detailed the ceremony recognizing the actions of officers and first responders on June 22nd:

On June 22nd, at approx. 2150 hrs, Sergeant Deluca was stabbed in the back with a knife, while conducting an inventory search of a suspect in the lobby of the police station. After a brief foot pursuit involving Sgt. Deluca, Det. Keith Nichols, and Off. John Officer; the assailant was taken into custody behind the Southborough Public Safety complex.

Communications Officer Robyn Richards provided professional dispatching, while getting the necessary help on scene to assist the SPD officers. This assistance came from members of the Southborough Fire Department, the Westborough Police Department, and the JDP clinician, Christina Fitton. Our brothers and sisters in the SFD treated and transported our injured Sergeant, while members of the Westborough Police quickly responded and secured the scene with additional manpower.

During the ceremony yesterday, Sgt. James Deluca, Det. Keith Nichols, and Off. John Officer were all presented with the Public Safety Officer Medal of Valor. The award recognizes public safety officers who exhibit exceptional courage, extraordinary decisiveness, presence of mind, and unusual swiftness of action; regardless of their own personal safety- in an attempt to save or protect human life. Their actions are considered above and beyond the call of duty. Sergeant Deluca was also presented with a Purple Heart award, for the injuries he sustained during the attack.

We thank these officers for their commitment to professionalism, and are proud that they are representing the Southborough Police Department in service to our community.

Home Base No Shave fundraiser

The SPD held a fundraising campaign last month that I missed sharing. I’m guessing that facemasks kept most of us from realizing that some officers were looking scruffier than usual:

The Southborough Police Department is pleased to announce that we will be participating in the “Home Base No Shave” campaign during the month of November this year!

Home Base No Shave, a Red Sox Foundation and Massachusetts General Hospital Program, is dedicated to healing the invisible wounds for Veterans of all eras, Service Members, Military Families and Families of the Fallen through world-class clinical care, wellness, education and research. As a National Center of Excellence, Home Base operates the first and largest private-sector clinic in the nation devoted to providing life-saving clinical care and support for the treatment of the invisible wounds to include post-traumatic stress, traumatic brain injury, anxiety, depression, co-occurring substance use disorder, family relationship challenges and other issues associated with military service.

Every Southborough Police Department member that is taking part in this great program, will be donating $100 each to earn an exemption from the department’s facial hair policy. We have also created a camouflage version of our uniform patch, which is now for sale- with 100% of the proceeds benefitting Home Base No Shave.

Last winter, the SPD announced seizure of a “large amount of cash and marijuana” and that the suspect appeared to have jumped bail. This fall, half of the seized cash was officially allotted to the SPD. A Facebook post clarified that the $11,551 can’t just be used for the regular operating budget. Under Mass law, it must:

be deposited in a special law enforcement trust fund and shall be expended without further appropriation to defray the costs of protracted investigations, to provide additional technical equipment or expertise, to provide matching funds to obtain federal grants, or to accomplish such other law enforcement purposes as the chief of police of such city or town, or the colonel of state police deems appropriate, but such funds shall not be considered a source of revenue to meet the operating needs of such department.

The other half was allotted to the District Attorney’s office. You can read more in the SPD’s post here.

In much more somber news, as I previously posted, the SPD took part in the search and recovery of a Framingham woman last month.