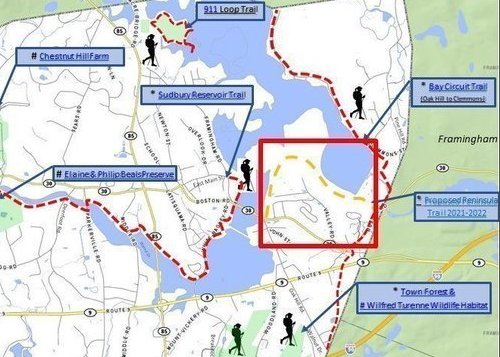 Above: The Trails Committee is looking for support to close a gap in Southborough Trails and the Boroughs Loop. (image cropped from map on change.org)

This year, a lot of plans and goals were derailed by the pandemic. The Southborough Trails Committee is looking for public support to get one of their initiatives back on track.

In Fall 2019, the committee announced the grand opening of the Boroughs Loop Trail (BLT). The connected trails were made possible through years of work with DCR, MWRA and neighboring towns. Marlborough led the opening celebrations, and some events were also hosted in Southborough and other towns on the loop.

Some of you may have noticed at that time that calling the trail a Loop was aspirational. There are some sections in Southborough that still needs to be opened up to public use. I’m told most are small, with only one major gap, the Peninsula Trail. The Trails Committee is seeking to get the public access plan finalized for that tract:

The plan will enable us to open a new section of trail that will help to close the Southborough gap for two regional trails. . .

The proposed Peninsula Trail is a 1.6-mile section of trail on a parcel of land near the Fayville Dam, north of Rt. 30. This section of trail is part of a 33-mile regional Boroughs Loop Trail (BLT) that connects the trail networks of Marlborough, Northborough, Westborough and Southborough. The trail will also be part of MWRA’s Aqueduct Trail system and will serve as a future connection to Framingham’s Aqueduct Trail on the east side off Pine Hill Road. Constructing this trail will not only help to close the trail gap in Southborough but will also expand recreational and open space resources for the community and increase the walkability of Southborough via trails.

DCR was working on a public access plan last winter. The pandemic put the process of collecting public input on hold. Now the Southborough Trails Committee is looking to move the process forward again. To help add the Peninsula Trail to the BLT, the committee is now reaching out to the public for “Statements of Support”.

Already, the Committee has received letters of support from Marlborough, Westborough, Northborough, Sudbury Valley Trustees (SVT) and the Metropolitan Area Planning Council (MAPC). They’ve also gotten hundreds of signatures thanks to social media. They’re looking to turn that into thousands.

The letter is on change.org which refers to it as a petition. But Committee Chair Kathryn McKee stressed that they don’t consider this a petition. (Petitions tend to connote criticism, and the Committee has a good working relationship with Mass DCR.)

Instead, they are positioning it as signing on to a “Statement of Support”. The point of the signatures and any comments is to let the agency know that the community is widely interested in having access to the trail and supportive of efforts to complete the BLT loop.

We’re actively working to get 1000s of signatures to show DCR that we have the support of the community leaders and also the residents. We are seeking funding for the trails project via a CPA application and demonstrating public support will help our application as well. . .

We’re asking folks to not only sign it but to share it and ask others to do the same. We need to let DCR know this is a priority for Southborough.