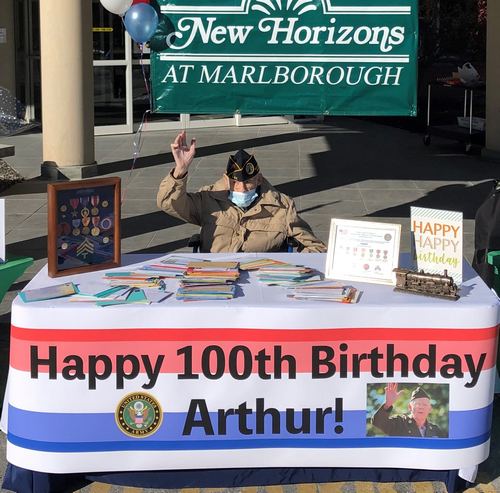 On Friday, a large, Covid-safe celebration was held to honor a former resident’s 100th Birthday. Southborough veterans invited and joined other area community members in celebrating the birthday of WWII veteran Arthur Butler.

(You can read more about Butler’s combat service and honors in my post from last week here.) Over the weekend, I received photos and highlights from the celebration.

[Editor’s Note: Reminder, this Saturday the community is invited to participate in another Vehicle Parade – this one to thank first responders and Marlborough Hospital workers.]

In addition, Butler received a number of new recognitions.

7 News Boston reported that the Mayor of Marlborough also presented an accommodation to Butler and the Marlborough Fire Department gifted a custom-made fire helmet in recognition of his military service. Butlers also received a U.S. Flag that was flown over the Capital on Veterans Day courtesy of his U.S. Congressional Representative Lori Trahan.

Butler gratefully told well wishers that the celebration was more than he ever expected. According to a New Horizons representative:

When we returned to his apartment after the parade, Arthur was so happy and thankful to have so many people that care about him! He finished out his day with a large piece of birthday cake and a half a glass of white wine while remarking that he didn’t want to overdo it!

The cards we put out on the tables on Friday were just the ones he received on Friday! He probably received 300+!

Below are a better look at the New Horizons’ pic followed by contributed photos:

You can also view a brief video from 7 News Boston here. (I’m told that Southborough Access Media was also on hand to record the event and will share that video once it is edited.)

Updated (1/11/20 3:49 pm): You can find couple of photos and an interview with Butler in Metrowest Daily News here.

We attended the birthday parade for Arthur. He was our neighbor for nearly 20 years, and it was an honor for us to celebrate this milestone with him.

I have to say – At 100 yrs young – Mr. Butler is still sharp!!!! I wish I could have taken a picture of his face when he saw Rep. Dykema approaching to present him the Proclamation from the State. It was a pleasure and an honor to participate.