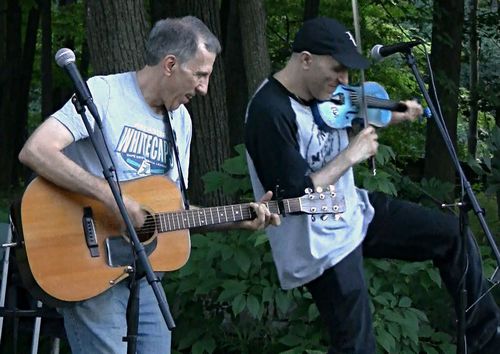 Above: Knock on Wood hopes to open this summer’s concert series next Wednesday with their funny original tunes and well-known rock covers. (contributed photo)

Southborough’s Summer Concert Series is back. This summer’s lineup brings back three popular acts to the outdoor stage and one new one. As usual, the fun takes place at Neary School’s field, 53 Parkerville Road. 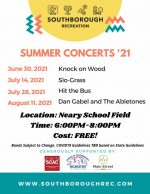 The free concerts will take place bi-weekly on Wednesday nights from 6:00 – 8:00 pm, next week through mid-August. (Alternating Wednesdays, Southborough Rec will be holding outdoor movie nights on the field.)

Kicking off the summer fun is the band that kicked off the series five years ago, Knock on Wood. They’ll hit the stage on June 30th. (At least, as long as weather cooperates.)

Be sure to bring your own chairs and/or picnic blankets.

Below is a press release promoting the first headliners:

FREE CONCERT: Knock on Wood rocks out in Southboro June 30

Howie Newman and Joe Kessler, also known as Knock on Wood, are anything but a typical folk combo, performing funny original songs (suitable for all ages) and well-known rock covers. Their varied repertoire includes everything from Tom Petty to the Eagles to the Kinks. They may also add a few children’s songs.

No matter what they play, it features excellent musicianship, pleasing vocal harmonies and … lots of fun.

Knock on Wood (www.howienewman.com/knockonwood) will be playing a free outdoor concert at Neary Elementary School, 53 Parkerville Rd., Southborough, on Wednesday, June 30, from 6-8 p.m. This event is sponsored by the Southborough Recreation Dept.

Newman (guitar, harmonica, vocals) is the songwriter and his engaging manner, which includes G-rated comedy and lots of audience participation, has charmed audiences all over New England. Song topics include Smartphones, not-so-graceful aging and his wife’s inability to parallel park.

A former sportswriter for the Boston Globe, Patriot Ledger and other newspapers, he will also be performing a couple of his many baseball songs, which include “It’s the End of the Curse and We Know It,” an R.E.M. parody.

Kessler, who plays fiddle and mandolin, has an energetic improvisational style that includes folk, rock, jazz and bluegrass. He has toured extensively throughout the United States and Canada as well as eight other countries, performing with Morphine, Jimmy Page and Robert Plant, the Boogaloo Swamis and many others.

“We’re not the traditional guitar-and-fiddle duo,” says Newman. “Joe and I like to keep things up-tempo, do some rock covers and get the audience involved. The idea is to play some great music and have fun.”

For more information about Knock on Wood, including videos and music samples, visit www.howienewman.com/knockonwood.