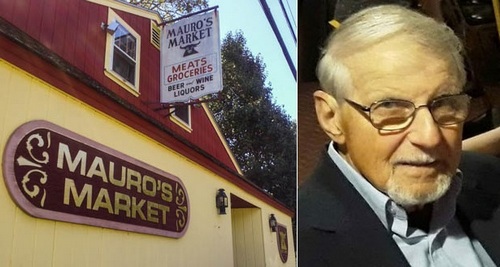 Above: Community members shared their memories of the original owner of Mauro’s Market in downtown Southborough. (images L-R cropped from photo by Susan Fitzgerald and obituary)

This week, services were held in Southborough for the late, original proprietor of Mauro’s Market. William Mauro passed away last week.

The Milford Daily News wrote up a nice feature remembering him. It includes memories shared by family members and Southborough residents. Below are some highlights:

Son of Joe Mauro, a Southborough farm owner, and brother to Calvin, an assistant school superintendent, and John, head groundskeeper at St. Mark’s School, 32-year-old William had bigger plans for himself in 1967.

He bought a market from the Ramelli family and ran it as a hardware store, which Steve says offered services in “glass-cutting, screen-cutting, selling nails by the pound and cornflakes up on the top shelf that (someone) would have to get a cherry picker to bring down a box.”

In the 1970s, the market added groceries, and when Steve graduated from high school in 1979, the store obtained a liquor license and evolved over time to become a grocery store that catered to the small town’s needs. . .

“There were certain people that would come in that didn’t have enough money to feed their kids,” Steve recalled. “My father would always tell me, ‘When so-and-so puts their groceries on the counter, put them in a bag. Don’t ring them up. Don’t charge them. Just let them go.’”

Willie, plain and simple, was a helluva nice guy. Quick with a joke, always smiling, and helped out more people than anyone will ever know. My most sincere condolences to all of the Mauro’s on the loss of such a man.