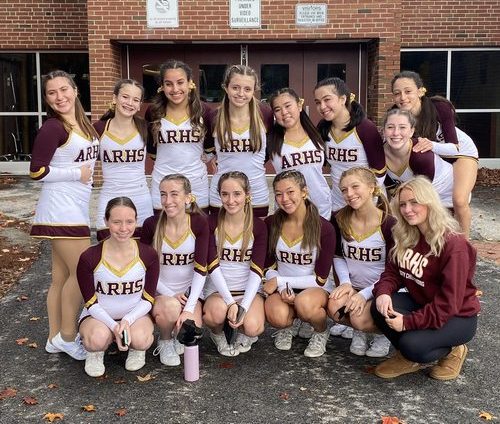 Above: ARHS Cheerleading competed at Shephard Hill yesterday. They head back this Sunday for the Mid Wach League championship. (photo cropped from tweet by @CheerArhs)

[Highlights from last week’s competitions and what’s on tap this week in high school sports.

This was scheduled to post yesterday, but there was a glitch. That’s OK, since MIAA brackets give me more news to share.]

The CMADA Central Mass tourneys are over. While three Algonquin teams made it to their Finals, none came out champions. On Saturday, Gonk Soccer teams both lost their bids 1-2. The Girls lost to Grafton and Boys to Leominster. You can check out the Telegram’s photo highlights from the Boys’ Final here.

Those teams are now waiting on MIAA tournament brackets to be posted.

The brackets are posted for Girls Volleyball. As I posted on Friday, ARHS lost its CMADA Finals to Westborough on Thursday. But that’s not the end of their journey.

The 8th seed Girls earned a Bye for the preliminary round. They will play 25th seed Lexington in “Round of 32” in the Division 1 State Championships. The game is on Gonk’s court at 5:30 pm tomorrow, Wednesday, November 3rd.

On Friday night, Wachusett Football ended ARHS’ winning streak, 21-7. Given the great season they’ve been having, that may not seem significant. But it turned out that was their last hope at making the state playoffs. Wicked Local covered the loss here.

Prior to the game, the Telegram explained the negative impact the MIAA’s new power ranking system was having on the team. According to Thursday’s Article, even if ARHS won Friday’s game the playoffs would be a longshot for the team:

The Massachusetts Interscholastic Athletic Association included margin of victory in the power rankings formula used to determine which 16 teams in each of eight divisions advance to the postseason. However, it was capped at 14 points so teams wouldn’t be rewarded for piling it on. . .

Teams like Algonquin, which have great records, may be on the outside looking in on Sunday as the MIAA seeds the playoff brackets.

There’s a weird split in the power rankings, one that could create two schools of thought when it comes to the importance of strength of schedule depending on what division you’re in.

Forty of the 64 teams (62.5%) in Divisions 5 through 8 that would qualify for the playoffs were they held today have an opponents’ rating that is negative. So they haven’t been playing meat-grinder schedules, but it’s worked out alright for them. . .

Algonquin’s non-conference schedule was pretty competitive as it included Doherty and Nashoba. Trouble is, both of those perennial powers are having uncharacteristically so-so to subpar seasons.

That, combined with the fact four of Algonquin’s wins have come by less than 14 points, has been a drag on its power rating.

ARHS Football’s only other loss this fall was to Nashoba in September. This week, they’ll get a rematch through the Central Mass non-playoffs. They’ll play at Nashoba at 7:00 pm on Friday.

While we wait for more MIAA brackets, there are a few Mid Wach League Championships scheduled for this week.

Boys and Girls Cross Country will head to theirs in Gardener on Saturday. (Those are listed as 11:00 am at Gardner Municipal Golf Course).

Cheerleading, which competed in its first competition on Saturday, will head to its championship at Shephard Hill this Sunday. (Results for Sunday haven’t been posted. The November 7th competition is listed on the MSAA website as beginning at 5:00 pm, but no times are listed yet for team performances.)