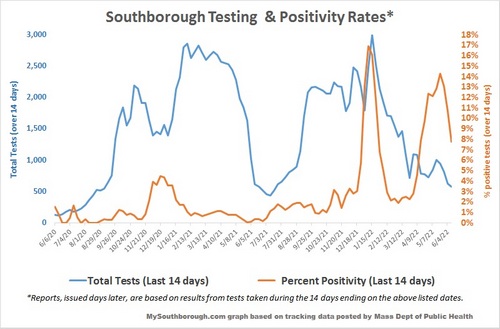 Above: The state reported a continued decline in Southborough’s positivity rates. (scroll down for enlargeable graph)

Great news. This week, the CDC designated the Community Levels for Covid in both Worcester and Middlesex Counties as Low.

On June 6th, I shared that the CDC had lowered our County’s Covid Community Level from high to medium. But as I noted, the level is dictated by Covid hospitalization rates. Southborough is bordered on three sides by Middlesex County – which is where the two hospitals closest to us reside. At that time, Middlesex County’s level was still high.

The state’s figures, reported last night, cover results of tests taken through Saturday, June 11th. Ave Daily incidence rate over 2 weeks is down by 29% from last week’s report. The % positivity rate also dropped. It’s now 7.8%. (State figures just serve as a way to gauge trends, since they only include official PCR tests.)

For the public schools, the combined figures continued to fall. In the Dashboard through Wednesday, June 15th, the three districts reported 31 cases. Only 4 were in Southborough K-8 schools and 7 at Algonquin.

The pooled tests screened only 3 cases (none by school testing of symptomatic staff/students). Participation in the screening program was down again. Even after subtracting the seniors who graduated, the participation was still just 18% of the NSBORO student population.