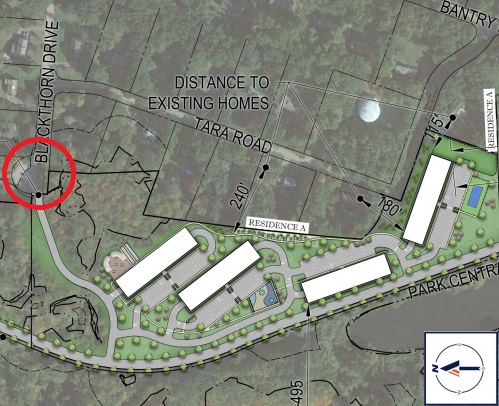 Above: The application for the new residential building project includes an interior drive connecting to the adjoining neighborhood. (image cropped and edited from MassHousing application)

This Monday, the Planning Board is scheduled to discuss the new 40B proposal at Park Central. That discussion is based on the developer’s application filed with MassHousing on July 15th.

The new proposal calls for 200 condo units split into four large buildings with 420 parking spaces. (138 units will have two bedrooms and 62 three bedrooms, each with two full bathrooms.)

That’s 20 more units than the original affordable housing project, but still smaller than the prior project was when combined with the additional 126-139 units in non-affordable Townhouses.

The biggest objection abutters and area residents voiced over the previous plans was the potential impact of increased traffic on the nearby back roads. The new proposal describes access plans not likely to please those opponents:

The development has proposed direct access from Flagg Road via Route 9 westbound in Southborough to Park Central Drive, a gently winding roadway which is also accessible from Blackthorn Drive. The proposed, interior development roadway will connect the two (2) adjacent neighborhoods at Tara Road and Bantry Road and will be lined with street trees and roadway lighting. The entry off Flagg Road will be designed as the private development entrance with robust landscaping which will be employed throughout to improve the visual impact of the development. Minimal site disturbances are proposed to allow for the natural site topography to remain and to serve as a buffer between the development and adjacent neighborhoods

The prior iteration of the project approved by the Zoning Board of Appeals required the access to Blackthorn to be limited to emergency vehicles only.

I’d been hearing rumors that it was coming, and looking for signs, but I missed the last Friday’s post on the Town’s website under its “News Flash” section. The blurb explains that “Developers seeking a comprehensive permit to construct affordable housing under Chapter 40B and intending to use a MassHousing financing program or financing through the New England Fund (“NEF”) program must receive Site Approval from MassHousing.”

Given that MassHousing green lit the site last time and that the Town hasn’t met the criteria for being exempt, it’s likely to be making its way to our Town boards.

To meet its 10% mandate, the Town is required to produce an additional 57 units. This number is expected to be adjusted further with the release of 2020 census data which is expected to require even more units. In accordance with Massachusetts General Laws Chapter 40B and supporting 4 regulations 25% of the units in the development (50 units) will be affordable to households earning 80% of Area Mean Family Income, adjusted for household size. These affordable units will include: 34, 2BR and 16, 3BR units.

The project also refers to the Town’s own stated goals to increase diversified housing with opportunities “that attract families and enable older adults to remain in Southborough as their needs change” and “serves a diverse local workforce”.

You can expect the new Park Central application to go before the ZBA as the main permitting authority, but also the Planning Board and Conservation Commission. The prior iteration was approved by the first board but never came to terms with the latter two.

Unlike this application, that permit process was complicated by its integration with a non-40B project, which ultimately resulted in being annulled by the Superior Court. (Interestingly, under project history in the application, the developer writes that the for the non-affordable project “The use variance for the market rate project was not appealed and remains in effect.”)

The ZBA’s handling of the last project sparked controversies over three ZBA members overseeing the hearings treated public commenters, approved waivers to certain regulations, dealt with potential conflicts, and seemingly rushed a decision process. Only one of those members still remains on the Board, Paul Drepanos.

Tonight, the ZBA approved releasing Executive Session minutes related to that original project. (Those are yet to be posted – but you can look for them soon here, for the following dates: November 9, 2016; December 14, 2016; and August 24, 2016.)

In 2016, the Planning Board was at odds with ZBA over conditions tying Planning’s hands on the related non-affordable project. And they sparred with developer Bill Depietri and the ZBA over the Major Site Plan review process. As I noted up top, the Planning Board will be discussing the new proposal at their August 1st meeting (which opens at 7:00 pm). You can find that agenda here.

Given the size of the development (and location near wetlands), the proposal includes a “high efficiency, waste water treatment plant”. Last time around, Depietri took the Conservation Commission to court over their denial of his plans for handling wastewater and stormwater.

For its water source, the proposal refers to the existing water lines through Blackthorn and Flagg.

Back in 2017, the Public Works Planning Board reported that the Town should investigate whether to build a water tower at Park Central. Just this summer, the PWPB was charged with re-evaluating the Town’s water infrastructure capital plans in light of a request by Hopkinton to connect to MWRA through our water system. The Board held a joint meeting with the Capital Planning Committee and the DPW’s water engineering consultant on Jul 18th to start those discussions.

Earlier this month, the Select Board made references to the imminent project. At their July 7th annual goals meeting, the Board included the goal, “Actively deal with new Park Central 40B project to achieve best outcome”.

Last Friday, the Board promoted Doris Cahill from ZBA Alternate to a full time member. Cahill told the board that she hadn’t found the job to be stressful. Select Board members Kathy Cook and Sam Stivers both laughed as they warned her that was about to change.

Observations from the application: