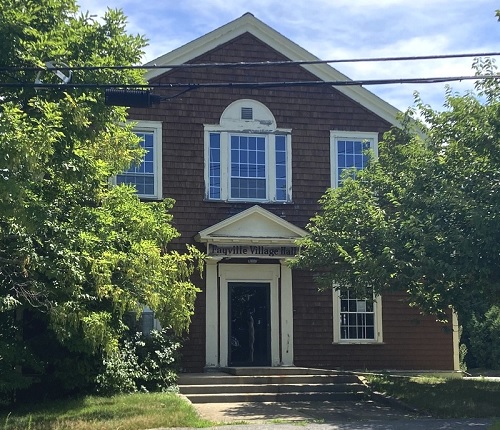 Above: The Town has the first right to purchase Fayville Hall. Before allowing the property’s donation to the Historical Society, officials may seek to extend those rights to a future sale. (photo by Beth Melo)

[Updated (8/30/22 10:26): Whoops – brain glitch. I repeatedly referred to the address as on Main Street instead of Central Street. (There’s a very different historical property at 42 Main!)]

The Select Board will quickly seek more “due diligence” before deciding on whether to release the Town’s Right of First Refusal (ROFR) to purchase Fayville Hall at 40-42 Central Street.

Town Boards and Committees have been asked to notify the Board by this Friday of any interest they have in the  property.

When the Select Board follows up next week, they are likely to vote to release their rights, but may seek to condition that on extending the Town’s ROFR if the property is sold again.

The Select Board convened a meeting on Friday morning to follow up on the official notice that the ROFR on the property was triggered by a draft sale agreement reached between owner Jon Delli Priscoli and the Southborough Historical Society.

[For those who haven’t been following the story on Southborough Historical Society’s plans for purchasing and rehabbing the old Fayville Village community hall, you can read about that here.]

Chair Kathy Cook initially recommended that the Board vote to release their rights. She noted: Town Meeting overwhelmingly voted to dispose of the property, the Town has other building projects on its plate, and the Town has no apparent use for the building. She followed that allowing the sale to Southborough Historical Society would be the right thing to do.

Cook furthered that if the the Town sought to invoke its right. Priscoli had agreed with SHS to withdraw his plans to sell. (She posited that could be replaced by a long term lease agreement.)

Member Lisa Braccio said that she believed the Board needed to be consistent about its process for due diligence. On a past ROFR (triggered by proposed sale of a Chapter 61A property at the end of Deerfoot Road) the Board sought feedback from other Town Boards and Committees.

Beyond that, Braccio proposed adding two conditions. In addition to extending the ROFR in the case of a resale down the line, she wanted to see the Preservation Restriction promised by SHS to be conditioned in writing. She said she trusted SHS’ intent but since the Town sold a valuable piece of property for only $21K to allow its preservation, they have in interest in seeing it continue to be preserved.

Member Sam Stivers believed enough past due diligence had already been done. He lauded the plans for the hall as an example of a successful private-public partnership. (The project is one that the Town couldn’t likely pay for but was partially made possible by the Town’s discount sale of the property with conditions.)

Members Andrew Dennington and Chelsea Malinowski preferred not to rush in last week. Both were concerned about issues related to the public parking for Fayville Park and Playground.

Cook had confirmed that easements for parking that were in the Town’s agreement were properly recorded as in perpetuity. But Malinowski stated that the agreement included placement of signs designating parking spots. That hasn’t happened. She worried that some members of the public visiting the park aren’t aware they are allowed to use the lot across the street.

Dennington followed that the street parking can fill quickly some days and the condition of the unpaved lot needs improvements. He described huge sinkholes with lots of water as often occurring. Town Administrator Mark Purple responded that the paving has been held off to allow the required ne septic system to be installed under the lot. He believes the lot will be paved and maintained after that is completed.

Dennington still wanted to see more detail on what work had been done and the future plans. He also wanted to give the public a chance to weigh in at a regular evening meeting.

Cook highlighted that since the proposed sale isn’t based on fair market value (it’s essentially a donation to SHS with a $100 price tag), the agreement calls for the Town to conduct an appraisal of the property’s value.

One issue that came up repeatedly in the discussion was the lack of clarity on the Town’s required steps under the ROFR. Cook stated,

I’ve seen a lot of ROFRs and I’ve never seen anything quite so brief and possibly poorly written as far as details go. So you’re left to to basically fill in the blanks.

The Board agreed to operate on the unwritten premise that there is traditionally a 30 day window to respond. They consider the clock to have started on August 19th.

Expect the Board to follow up on the topic in their meeting planned for the evening of Wednesday, September 7th.