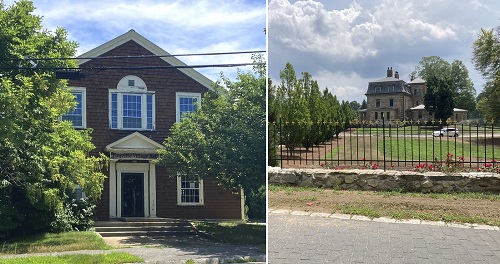 Above: Apparently, “JDP” is about to donate one of his properties to the Southborough Historical Society. While, I’m sharing that news, I’m also sharing an update to the other historical property in town that he owns. (photos by Beth Melo)

The Historical Society posted another major announcement about Fayville Hall.

I’m rounding that up with other Town news to share that also have connections to historic preservation in town. Those include discussions of the Burnett House’s fence and Preservation Restriction.

Fayville Hall to be donated to SHS

Earlier this summer, I shared news that the Southborough Historical Society had plans to purchase and renovate Fayville Hall. This morning, SHS President Michael Weishan announced a final agreement has been reached with the owner.

Apparently, the current owner is essentially donating the property:

JDP, as Mr. Delli Priscoli is almost universally known, has agreed to donate the building to the Society for $100. Providing the Southborough Board of Selectmen release their right of first refusal, which will hopefully occur this week, renovations will begin, as site plans and permits are already in place.

As I previously posted, SHS sold the official copy of the Declaration of Independence originally issued to Southborough. (You can read more about that from the prior post here.)

Funds from the sale were part of the group’s fundraising that will allow them to renovate and restore the property for use as a museum and education center. You can read more details on that in today’s announcement here.

That does still leave questions about the fate of the current Historical Museum in Southborough’s Flagg School, which is estimated as in need of approx. $290K worth of repairs.

Fayville Hall isn’t the only property owned by JDP. He is better known in town as the owner of the estate at 84 Main Street, the site of the Burnett/Garfield house.

In early July, I was surprised to learn that he had begun installing decorative fencing on the stone wall on the side of the property facing Main Street.

Given language in the Preservation Restriction purchased by Town Meeting voters, I wasn’t sure how the installation was allowed. I hadn’t heard (and couldn’t find) any mention of those plans in past meetings with the Southborough Historical Commission. So I reached out to the Chair for an explanation.

Chair Kevin Miller raised the issue at the Commission’s July 19th meeting. At the time, there wasn’t enough advance notice to add the item to the agenda.

The Commission agreed that they would discuss it as a group at their next meeting, but Miller first set the stage by describing it as a “nothing burger” in his mind.

No perimeter fencing or tall hedges shall be placed on the property blocking the view. There will be wrought iron gates at both entrances to the property.

Miller stressed that the fence does not obstruct the view, therefore does not violate the PR. The height is below 5 feet, which means most adults standing at the fence can look over it, plus the rails are spaced to easily see through them.

The Chair was clearly enamored with the “beautiful” black and gold fence which “perfectly” matches the gate at the main entrance. (That gate has been a point of contention among residents. On Facebook, commenters were about evenly split about loving or hating the look.)

Miller also opined that he believed that the alteration was minor enough not to require Commission approval. Finally, he stated that the Commission had been verbally notified of the plan before he joined it – although he didn’t detail how or when. (I couldn’t find anything in the minutes to support that the news was raised in a public meeting.)

The Commission will discuss it again at their meeting Tuesday night. As part of the discussion, they will also cover “Plans for periodic review of” the Preservation Restriction.

The meeting will also include updates on the status of projects going through the Demolition Delay process, including the “Doc Stone House” at 42 Main Street. And we may get an update on the Archeological Study planned for the St. Mark’s Street Park area.

The study is to investigate if there were indigenous (or other) people buried on the site between the Southborough Library and St. Mark’s Street. On Friday morning, Miller informed the Select Board that the contractor in charge of the study had finally received the permit from the state allowing them to proceed. (He believed that work at the site was likely to begin next week, but was unclear on the timing.)

(I have more details to share on the Park Street project, so stay tuned for a dedicated post tomorrow.)