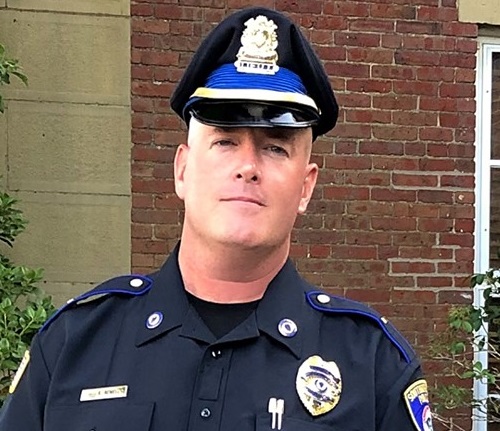 Above: Ryan Newell is taking on the top title in the SPD’s command structure (image cropped from 2019 Facebook post)

Lt. Ryan Newell has been serving as the de facto head of the Southborough Police Department since mid-late February. Pending contract negotiations, he will be the the official department head.

Following the “retirement” of former Chief Kenneth Paulhus announced in early June, the Select Board determined that they would attempt to recruit internal candidates only. At that time, expediency was one of the factors. But some members also expressed confidence that the Town had what it needed in-house.

Last night, Select Board Chair Kathy Cook opined the hiring process they followed was thorough and fair. She said she was pleased that it brought them to where they were last night.

The Acting Chief was one of two finalists interviewed on Monday night. The other was Sgt. Sean McCarthy. (You can read more about both candidates’ backgrounds here and view their interviews here.)

The board took a day to reflect before convening to vote last night. In the brief meeting, each member stated their preference and rationale. All referred to both candidates as strong ones.

It was clear that Newell’s position as Acting Chief over several months, as well as his prior role, gave him an advantage. Vice Chair Chelsea Malinowski noted that he had taken on the role as Acting Chief with no notice and showed that he was well prepared for it.

Malinowski viewed McCarthy’s background as a lifetime resident as an asset. But she prioritized the strength she saw in Newell’s 18 years of experience in the command structure and his work over the last 6 months.

But some members also pointed to candidates’ final interview answers as cementing the decision.

Member Sam Stivers referred to Newell’s answers on Monday as “giving him a little bit of an edge”.

Member Andrew Dennington said he felt confident about Newell’s readiness to step into the job. He appreciated Newell’s humbly expressed confidence that he had been training for the role his whole career and his understanding that he would now have to learn to partner with the Town Boards on budgeting and long term strategic planning.

Member Lisa Braccio liked that he had looked at nine other Towns’ policies and enrolled in a budget class. Other pluses were his relationships with other Towns’ chiefs, programs for memory issues and autism, and his involvement in policy making. She believed his leadership role as a lieutenant prepared him to be the next chief. She also lauded McCarthy for his emphasis on collaboration, building relationships for recruitment, reverse mentoring, and leveraging regional training.

Prior to the hiring process, Cook didn’t know either of the candidates. (She only joined the Select Board in May.) Having gotten to know them, she agreed with a blog commenter that referred to both as good men. She said she was proud that they both serve the SPD.

Cook concurred with the other members’ decision. She followed by stating “to” McCarthy that he acquitted himself very well. She assured that he has a “very bright future”.

Following the 5-0 vote, the Board entered closed Executive Session to discuss the contract negotiation. It’s safe to assume that, after the contract is finalized, a public swearing in ceremony will be scheduled.