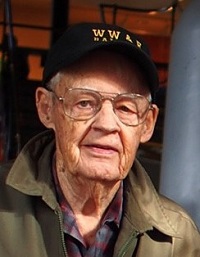 He was the son of the late Arthur M. and Edith (Colburn) Butler.

A decorated World War II Army Veteran, Arthur worked in the banking industry for 40 years. Arthur described himself as a railroad hobbyist. While working in the bank industry, Arthur became interested in trains and train rides. He joined the Waushakum Live Steamers and owned his own live steam locomotive. Arthur also enjoyed breakfasts with the “Old Men’s Club”.

Art Butler was 102 when he died this week. He was still sharp at 101, when I last saw him. He had joked that when he graduated from Northeastern in 1943 with a degree in accounting that the infantry was waiting for him right outside on Huntington Ave. On June 18, 1945 during the Battle of Okinawa Cpl. Butler was seriously wounded with fragments from a Japanese grenade. In that action he earned a Bronze Star.
On that same day Life Magazine published a feature story photographed earlier of that battle on the same ground where Art was wounded. He loaned me his parents copy of Life and I copied the story, Here’s one photo from Life. When the magazine arrived in the mail his parents had no idea of his whereabouts or that he had been wounded.
Art had a curious mind, a love of trains, steam engines, maps. He was an active participant in most any topic that came up at the Senior Center’s Dull Men’s Club where he was a regular until he was 99. The photo in Arthur’s obituary was taken during a Dull Men’s field trip to the Waterworks Museum where Art could admire the massive steam pumps. 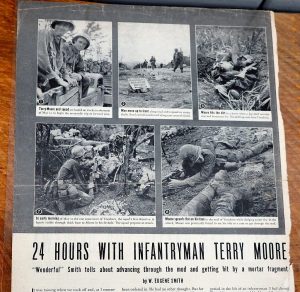 Thank you for sharing that. I’ll also point readers to information (and more images) you and others shared in January 2021(here) as the community prepared to honor Arthur Butler’s 100th birthday. Readers can also see a recap of and pictures from the safe-distanced celebration (here).