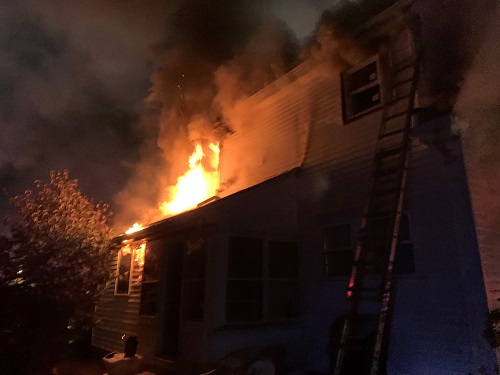 Some unfortunate news I missed on Friday. . .

Southborough and area firefighters quickly “knocked down” a house fire at 75 Northboro Road on Thursday night. Still, the damage left the home uninhabitable.

According to Select Board member Lisa Braccio, the homeowner isn’t currently need of help from the community. She said he was grateful for all of the support and offers that quickly came in.*

The house fire was reported by the owner at 10:52 pm on October 6th. The Southborough Fire Department described on Facebook:

Southborough firefighters battled a structure fire on Northborough Road late last night. Upon arrival, Engine 23 and Ambulance 28 found heavy fire coming from both the first and second floors at the rear of the single-family home. The lone resident was able to evacuate on his own. A first alarm was transmitted, bringing firefighters from Westborough, Ashland, Marlborough, and Hopkinton to the scene, along with Southborough Tower 21. Crews from Southborough and Westborough knocked down the fire within 20 minutes through a coordinated and aggressive interior attack. All hands worked to extinguish hidden fires and remove damaged contents from the home. The last unit cleared around 2:00 am this morning. The home sustained fire, smoke, and water damage and the Red Cross was called to assist the resident. The cause of the fire is being investigated by the department.

According to Metrowest Daily News:

[Fire Chief] Achilles said the home is uninhabitable and sustained “significant structural and content damage to several rooms on both floors.” He said a damage estimate has not been determined.

The American Red Cross assisted the resident in finding lodging after the fire, the chief said.

Below is a video that was posted by SFD of the fire:

*If the situation changes and the owner does need help, she will let me know so that I can inform readers.