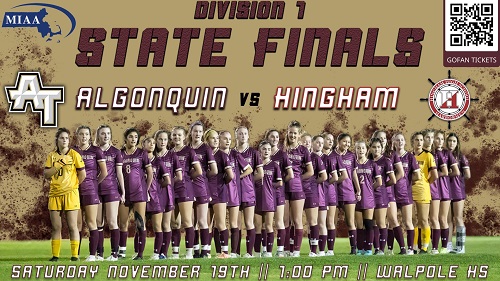 Above: ARHS is the State Championship Finals for Girls Soccer. (image from tweet by @ARHSAthletics)

The Telegram covered the Titans’ “thrilling OT win over Wellesley” in the Final Four:

[Gabby Miranda] maneuvered through a wall of Wellesley High defenders and fired a game-winning goal in overtime to secure a 2-1 come-from-behind victory in a Division 1 state semifinal.

Sports journalist Tommy Cassell tweeted a video of the action:

Algonquin senior Gabby Miranda knifes through the Raiders defense a buried a right-footed shot with a little over 2 mins left in the first overtime to send the Titans to the D1 state championship. pic.twitter.com/vKd6ZWOS5S

Cassell’s article in the Telegram described the team’s shaky start and turnaround:

Heading out of halftime, the fourth-seeded Titans were a “little rattled” as they trailed the ninth-seeded Raiders, 1-0.

But finally in the 70th minute, Algonquin broke through when sophomore Dylan Lochhead lifted a corner kick into the box that found the head of junior Keira Megan and the back of the net to knot the game up at one apiece. . .

“We’ve been waiting for that (corner play) all season,” Algonquin senior captain Sadie Candela said. “Once that happened, there was no doubt in my mind that we’d win.”

The Titans are scheduled return to Walpole on Saturday at 1:00 pm to challenge 2nd seed Hingham.  It’s the first time since the 4th seed team entered the tourneys that they’ll have to take on a team with a higher power ranking.

To get to the Finals, Hingham beat 3rd seed Bishop Feehan. (Their Final Four game had its own drama with the 2-1 win cinched in penalty kicks.)

Tickets must be purchased online here.

As I posted earlier this week, ARHS Boys Cross Country (and Olivia Guckian from the Girls team) will head to All States at Fort Devens this Saturday. Girls D1 runners take off at 2:00 pm and the Boys at 2:45 pm.

Following up on ARHS Cheer. . . they didn’t qualify for an At Large bid for the CMass Finals. That’s the end of their competition journey this fall.

That doesn’t mean they’ll be putting away their pom poms just yet. Algonquin is hosting the annual Thanksgiving morning Football game vs Westborough (with a big pep rally the morning prior).