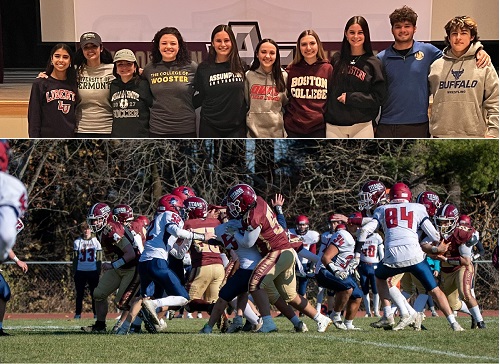 Above: ARHS senior athletes sported the colors they’ll be wearing next fall and Titans Football hosted its final game of this fall. (image from tweet by @ARHSAthletics)

Last week, Algonquin celebrated ten students’ commitments to compete in college sports next year. And, after a tough season, Gonk Football went out on a high note.

Last Tuesday, ARHS Athletics tweeted photos of its annual signing ceremony. The school included a list of the following student athletes who secured a place on college teams next fall:

(In answer to a question the last bullet on the list might prompt — No, Algonquin doesn’t have a crew team.)

The following day, the school held its big annual pep rally. This year, it included some pie-faced administrators. The student council sold raffle tickets for the honor of stuffing a cream pie in the face of a few school celebrities. You can see the pics right of ARHS Principal Sean Bevan taking one for the team.

You can check out a few photo highlights courtesy of Owen Jones Photography below (and the full gallery here).

Looking ahead at winter sports. . .

While season competitions don’t kick off until next week, some Titans in pre-season competitions this weekend. Wrestling and Girls Ice Hockey will play in scrimmages. The Boys and Girls Swim teams will take part in Milford’s annual Relay Carnival on Saturday morning, then the 20th Annual MidWach Swim-a-thon Against Hunger that night.

Here are the details: