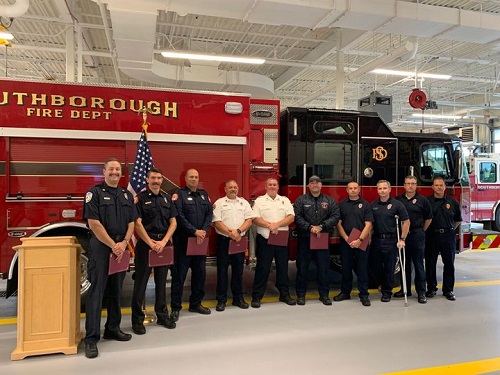 Above: Southborough’s Fire Chief recognized police officers and firefighters with Letters of Merit for their response during the August 5th fire on Sears Road. (photo from Facebook)

Although I’ve shared most of the biggest news out of Southborough Fire and Police departments over the past few months, there’s quite a lot that I haven’t covered.

Here’s my roundup of what our public safety departments have been up to since my last round up in July.

(This doesn’t duplicate the news that I have been sharing.)

This summer, I wrote about two house fires in Southborough. Those were just two of many fires that the SFD responded to since my last roundup in mid-July. Other fires included homes in neighboring towns, brush fires, a lawn mower, and one resulting from a car crash. The SFD also responded to at least 5 other car crashes that required a hospital transport.

On Facebook, the SFD posted photos (some of which I included below) and details about their responses to those incidents, plus their rescue of an injured hiker:

Looking a the activity reports posted by the chiefs, there were a lot more emergency responses that weren’t detailed on Facebook.

For the first time, the Southborough Police Department posted a monthly activity report. Theirs covers October incidents, and shows that officers:

Some of those community services likely include public relations, like their “Coffee with a Cop” event, public outreach at Heritage Day, a visit from a Daisy Troop, and taking part in Community Reading Day at Neary, and the pre-Halloween Trunk or Treat. But they also include special services like the Free Car Seat Inspection Day held in partnership with Southborough Kindergroup and assisting with a Trails Committee hike.

On a more somber note, the department sent representatives to the funeral services for the two police officers murdered in the line of duty in Brisol, CT.

Below are public safety personnel promotions, new hires, special recognitions, and accomplishments (that I haven’t already covered), since my last roundup.

On November 1st, the SFD held a ceremony to promote 8 employees:

Last night the department recognized the promotions of five Captains and three Lieutenants. Through recent collaboration and formal agreement, the town, department, and its members were able to realign and revise the rank structure of the department; recognizing the roles, responsibilities, and high level of accountability required of our supervisors. These promotions established and affirmed the department’s commitment to succession planning, professional growth, and career development. This opportunity was both unique and unprecedented, as it was the first time the department has elevated the positions of this many members at any one time. Formally sworn in by Town Clerk Jim Hegarty during a ceremony that included families, friends, peers, and town officials were Captain Christian Dano, Captain Neal Aspesi, Captain Kenneth Franks, III, Captain Christopher Shanahan, Captain Scott Navaroli, Lieutenant Benjamin Wilmot, Lieutenant Dana Amendola, and Lieutenant Jason Roach.

Two months prior, they welcomed two new full-time (probationary) Firefighter/EMTs — Tabitha Conway (who had served as a call-member) and Adam Kaminski-Miller.

In September, several officers and firefighters were recognized for their “superior performance” at the August 5th house fire on Sears Road. In October, two firefighters were among the many on the District 14 Technical Rescue Team that were recognized for helping to successfully locate a missing person in the woods through a wide area search of the woods along the Hopkinton-Milford border in July.

The SPD boasted about officers trained to take on new responsibilities:

The SFD boasted about Firefighter Brittaney Doane who made headlines as a nationally competitive Olympic weightlifter.

The SFD also posted pics from some of their specialized training sessions:

This month, the SPD is raising funds for the “Home Base No Shave” campaign:

Home Base No Shave, a Red Sox Foundation and Massachusetts General Hospital Program, is dedicated to healing the invisible wounds for Veterans of all eras, Service Members, Military Families and Families of the Fallen through world-class clinical care, wellness, education, and research. . . .

Every Southborough Police Department member that is taking part in this great program, will be donating $50 each to earn an exemption from the department’s facial hair policy. We have also a camouflage version of our uniform patch, which is now for sale- with 100% of the proceeds benefitting Home Base No Shave.

To request a patch (as seen [right]), please send a self-addressed stamped envelope- as well as a check for $10 per patch- made out to the Southborough Police Association, 32 Cordaville Road, Southborough, MA. 01772 (Attn: Det. Steve Neivert). ** You can also purchase a camouflage patch in the lobby of our station, from our on-duty dispatcher. **

Earlier this month, Officer Landry provided an escort for local veterans passing through town on their 7th annual, 90-Mile March to raise funds and awareness for issues related to veterans.