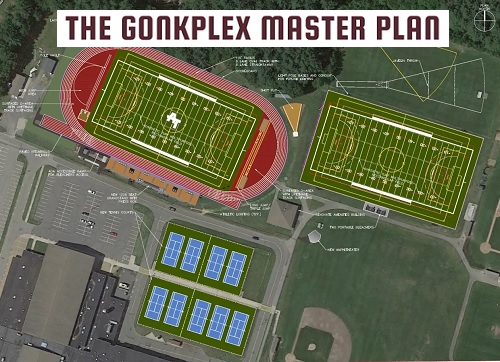 Above: NSBORO administrators and the Regional School Committee will be asking both Southborough and Northborough voters to pony up for “long overdue” updates to the Algonquin Athletic Complex. (images from Gonkplex website)

Since last spring, I’ve made references to the school administration’s pursuit of a project to update Algonquin’s Athletic Complex. But I haven’t shared the details with readers.

With the big funding request headed to Annual Town Meeting in March, it’s time to take a look.

Readers who have kids in the Northborough-Southborough public school system have likely already received plenty of communications about the project. Others who attended the Fall Town Meeting or keep tabs on Select Board meetings may have seen presentations. But many of you may not even be aware of the big project coming down the pike.

The NSBORO administration describes the project as “a proposed renovation to our aging & out of compliance athletic facilities”. As highlighted on their dedicated website and public presentations, much of the complex was last updated or installed 29 years ago, except for the tennis courts installed 19 years ago.

The plan is to install/renovate:

So, what will all of this cost? With contingencies built in, and based on assumptions about bonding costs, the most recent estimate is $7,500,365.58.

The administration has pitched that the facilities aren’t just for the high schoolers’ use. During non-school hours, when they aren’t being used by the Athletics Department, they will be available for use by residents of both towns. Using that rationale, they are pursuing Community Preservation Act funds* from each town to offset the cost.

With CPA funding uncertain, the administration has appeared to base estimates on the costs to each town without CPA funding. Based on the Towns’ legal Regional Agreement, costs are split based on the enrollment figures for each Town over four years. That currently makes 37.67% of the cost Southborough’s responsibility. But that could increase or decrease over the life of the bond expected to be paid through 2038.

According to minutes of the presentation to the Southborough Community Preservation Commission about 80% of the project does qualify for CPA funds. But the school is only seeking $745,964. (I haven’t found the current figure requested from Northborough’s CPA funds.) From statements at Southborough’s Select Board Meeting in December, it appears that is based on the limited funds available in the CPA coffers.

In the joint meeting with the Advisory and Capital committees, Advisory Chair Andrew Pfaff raised the possibility of pushing the project to allow time for the Town to potentially raise the CPA surcharge.* Administrators pointed out that would change the project timeline to interfere with fall sports.

If the project funding is approved by both Towns, the work is expected to begin this summer. The project timeline actually shows work continuing into the fall, with “substantial completion” by September 29th and close out in early October. But it sounds like the hope is that varsity field would be ready in time for the fall season. (Although, according to a Community Advocate article last spring there was an expected impact to practice fields in the fall.)

I didn’t hear any explanation of the financial impacts if both or only one of the Towns approves CPA funds. In a November meeting, CPC consultant Freddie Gillespie pointed out that Southborough voters will be forced to make a decision before Northborough’s Town Meeting convenes in April. She suggested that CPC’s Article should be made contingent on Northborough’s Article passing.

As for alternative if the project isn’t funded, the website states:

The lighting, track, and tennis courts need to be replaced regardless of whether the project is approved, which is anticipated to cost over $2.5 million dollars. Additionally, any work on the current field would require the facility to be made ADA-compliant, which includes upgrading the stadium seating and adding restrooms to the current amenities building. Other costs associated with not moving forward are renting space for our track and field programs, transportation costs, and finding alternative field locations for evening games.

In terms of avoiding repeated issues in the future, the administration stated that they want to create a revolving fund to save along the way for the future capital needs.

For more details on the project, check out the dedicated website here. You can also read some interesting recent articles in the Community Advocate about the presentation to the Northborough Planning Board and the fact that it’s not the only big capital project on Northborough voters’ horizon.

*For those unfamiliar with CPA funding, it is a fund created by set surcharge on property tax bills, with a percentage of matching funds from the state. Past CPA projects were sometimes touted by project proponents as not costing taxpayers because the same surcharge would be collected whether funds are used or not. However, as I’ve noted in the past, there can be future costs when funds aren’t available to use towards projects that voters later deem necessary/worthy.

Recently, the CPC has been discussing bringing voters an Article to raise the CPA surcharge, so that there will be more money available to fund projects. The pitch is that having more funds with a state match will save taxpayers money.

**Based on the plan presented at the December Select Board Meeting (which was based on NSBORO’s Financial Advisor’s forecast), I calculated that Southborough average single family homeowners would be paying a total of $1,050 spread over 14 years beginning in FY25. Based on the suggested plan, it’s a little over $25 per ave household in 2025 & 2026 (for interest only payments), over $100 in 2027, then just over $80 per year through 2038. However, Select Board Chair Kathy Cook indicated that she would want to take a closer look at that plan since the higher cost in 2027 is also the final year of the bond payments on the Algonquin renovation, creating a double whammy for taxpayers that year.