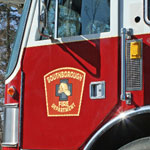 (This is part 1 in a series of posts about the proposal for a new aerial ladder truck in Southborough. For more information, see the series introduction.)

Back in the fall of 2007, Southborough was forced to retire its only aerial ladder truck after safety issues, including fraying cables in the hydraulic system and rotting cab supports, were found during an annual inspection. The decision to retire Ladder 26 left Southborough with three fire engines, but no ladder truck.

There are reasons why having an aerial ladder truck as part of your fleet is important, the most obvious being speedy rescues. If you’re trapped on the second story of a burning building, you certainly want to see an aerial ladder truck pulling up to the scene. But there are less obvious reasons, too. At least they’re less obvious to those of us who aren’t firefighters.

Letting the heat out
A residential fire doubles in intensity every 10-30 seconds and can reach temperatures in excess of 1,000 degrees Fahrenheit. Before entering a burning building, firefighters need to create ventilation paths by breaking windows or punching holes in the roof. It’s one of the first things firefighters do when they get to the scene of a building fire, and if the building is more than 1 story, they need a ladder to do it.

A question of manpower
So why not use ground ladders? The longest ground ladder carried by the Southborough Fire Department is 24 feet, which is not long enough to reach many second story windows or roofs. Why not simply buy longer ladders? It’s an issue of manpower.

Depending on length, a ground ladder takes anywhere from two to six firefighters to set up. Keep in mind, these aren’t the same ladders you use to clean out your gutters. The ladders firefighters use are industrial strength and quite heavy.

Southborough typically has 4 firefighters on duty. If half or all of the crew has to set up ground ladders to ventilate the building, it means the actual work of fighting the fire or making rescues is delayed. By contrast, it takes only one firefighter to operate an aerial ladder truck, meaning the rest of the responders can work on things like setting up a water supply.

Bottom line, when responding to a fire in 2-story or greater building, an aerial ladder truck means a faster response with fewer firefighters.

Next in the series
There’s probably no debate that an aerial ladder truck is important to firefighting in general, but is it important to Southborough in specific? More on that tomorrow.