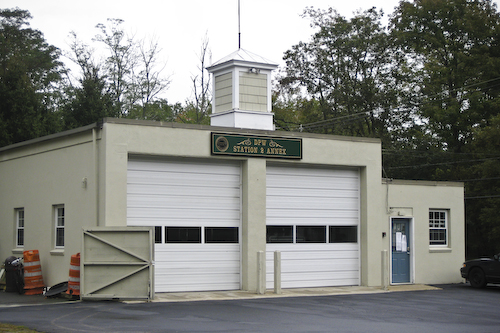 Above: Fire Station 2 – not a fire station anymore

Those of you new to town might not know that Southborough used to have a second fire station. Creatively named Station 2, it was nestled on a cross street between Southville Road and Highland Street. The building remains, but (except in cases of emergency) it’s no longer used as an active fire station.

My Southborough commenter Anita Reeder had some questions about the building. Here’s a snippet of her comment from earlier this month:

When we moved to Southborough 20 years ago, we had a small fire station on the corner of Harrington and Southville. A few years later we were told at town meeting that it was unhealthy (mold issues, as I recall) and needed to be condemned because it would cost too much to repair. So, close it they did. A year later it was housing a DPW annex! I never heard why it suddenly was ok to have town employees there after being told it was harmful to human life.

Before Fire Chief John Mauro Jr. retired last week, I had a chance to ask him about Station 2. Mauro said it wasn’t mold that caused the Fire Department to abandon the facility, but the projected cost of upgrading it to modern standards.

Mauro said the station was built as an on-call base and was never intended to accommodate full-time firefighters. “It wasn’t built for living,” he said.

Until the early 2000’s the station was staffed with one firefighter. Since regulations prevent a firefighter from responding to a call alone, Mauro said the department looked into putting a second person there. Problem was, the building couldn’t support it.

Mauro said there were major issues with the septic system, floor drain, and exhaust removal system. He also said the cost to upgrade the living quarters would have been “significant.”

“It barely accommodated one person. It couldn’t accommodate two without significant upgrades,” Mauro said. “It was cost prohibitive.”

I don’t know the exact timing, but as Anita suggested, sometime in the last decade the fire department abandoned the building and it was taken over by the DPW as a storage annex.

“As a person who lives on the south side, there was a feeling of security having firemen and EMTs so close by,” Anita wrote in her comment. “Now with everyone housed together on Main Street, it takes a heck of a lot longer to get to us, especially going over the reservoir during rush hour times.”

It’s a feeling many other southsiders have expressed, as well, but Mauro said the location of Station 2 was actually not ideal for reaching south side homes. He said a study conducted several years ago suggested the best spot for a second station would be along Route 85 near Mt. Vickery Road.

When the former High Speed Video building at 150 Cordaville Road (just south of Route 9) became available in 2009, the town briefly considered it to house both the police and fire departments. Many of you were excited about the idea at the time, but plans were abandoned when Metrowest Gymnastics leased the building.

It was dissapointing to see the station close being on the south side myself. The response time is a little longer coming from the center of town but not much. The Southborough fire and police have been very good in this regarrds. I did do a double take when I went by the old station after hurricane Ireane came thru as I beleive the fire trucks were parked in the building. Good thinking Southboro FD.