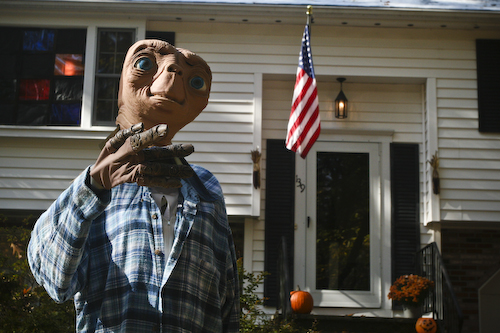 Above: ET is just one of many aliens waiting to greet trick-or-treaters at this Parkerville Road home

Halloween planning comes early for Blair Sutherland. The Southborough resident has a countdown to Halloween the way many of us have a countdown to Christmas. It makes sense. He has a lot to accomplish.

For about the past ten years, Blair and his wife have staged a Halloween spectacular in the front yard of their Parkerville Road home. There are creepy characters lining the driveway, props scattered across the lawn, atmospheric lighting timed to a soundtrack of music and audio clips. It takes them months to plan and construct. The results are worth it.

“We’re entertaining ourselves as much as the kids,” Blair said. “We battle with ourselves to make it better every year.”

Each year the Sutherlands build their display around a particular theme. This year it’s aliens. Past years have featured Harry Potter, Pirates of the Carribean, and the Wizard of Oz.

Blair said when he and his wife moved to Southborough in 1998, they had very few Halloween visitors. “The next year we put a ghost in our yard to reel them in,” he said. “It kind of mushroomed from there.”

The characters in this year’s display – ET, Spock, Yoda, and others – are pulled from classic movies. Each character is wired up for audio that is controlled by multiple sound systems in the house. On the day I visited, Blair was working on timing a light display to the theme from Close Encounters of the Third Kind.

Blair said he has always enjoyed Halloween. “I had playful grandparents who let me hang a ghost in their tree,” he said. “It had a string attached so I could make it move when trick-or-treaters came.

“We don’t have any kids, so for me this is just a way to have some fun and to create Halloween memories for kids.”

The Sutherlands expect to welcome more than 250 trick-or-treaters tomorrow night. Some will be neighborhood kids, others will come in caravans of SUVs and minivans.

“The kids look forward to it every year,” Blair said. The kids aren’t the only ones.

Check out the gallery below for a preview of this year’s display. Blair insists it’s much better at night when lights give everything a spooky glow, but it’s pretty impressive even in daylight. Click an image to enlarge. To see the show for yourself, take a drive by 139 Parkerville Road either tonight or tomorrow night.

I saw this house with my son last week, and it wasn’t even finished yet. It was really amazing, and he made me promise he could trick or treat there this year. What a great job of decorating!

It was phenonemal tonight! With each character having it’s own scene with lighting and audio…it just came alive. My kids loved the spaceship and the movie clips!!
Thank you Blair and Carol!

Wish I could have seen it. Sound like an absolutely frightful display. I am really impressed just seeing the pictures. Props to you Blair for your creativity and your execution of a great idea.