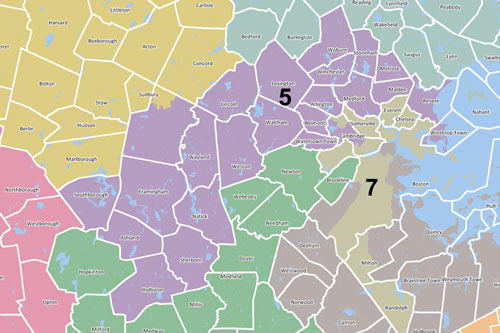 Above: Under a proposed redistricting plan, Southborough would become part of the Fifth Congressional District (in purple above)

Lawmakers released a sweeping redistricting plan yesterday that reduces the number of congressional districts in Massachusetts from ten to nine. It’s a plan that would move Southborough to a new district with a new representative to the US Congress.

Southborough is currently in the Third Congressional District with surrounding towns including Marlborough, Northborough, Westborough, Hopkinton, and Shrewsbury. The district stretches from Rutland in the west along a narrow band south all the way to Fall River. It’s represented by Democrat James McGovern who makes his home in Worcester.

Under the new plan, Southborough would move to the Fifth Congressional District, which is currently represented by Democrat Edward Markey of Malden. Southborough would mark the extreme west end of the district which extends east and north through Framingham, Natick, Wayland, Weston, portions of Cambridge, and out to Winthrop.

Other Metrowest towns will also see big changes under the proposal, which still has to be approved by the Legislature.

You can view the current district map along with the proposed one on the state’s redistricting website. The public has just three days to provide feedback on the plan.

What do you think of the proposal? Is this good news for Southborough or not? Share your thoughts in the comments.

What would this mean for the regional schools – shared with a town in a (proposed) separate district?

Agreed. And under the proposal, we’ll be in the same congressional district as Revere?? How does that make any sense?

Mark – it makes perfect sense if you want to make sure that no Republican has a snowball’s chance in a very warm place of getting elected. Gerrymandering has been around for centuries. Do you think the latest crop of elected officials in the State House are any different?