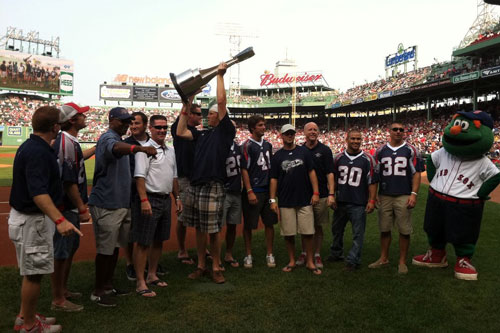 Above: The Boston Cannons show off their championship trophy at Fenway Park earlier this fall (photo via Facebook)

The trophy was won this year by our local professional lacrosse team, the Boston Cannons. It was their first championship win since the team was founded in 2001. Like the Stanley Cup, players get to take the trophy for a couple of days. On Monday, team captain Mitch Belisle will bring the trophy to Southborough.

Residents are invited to come see the Steinfeld Trophy at the Southborough House of Pizza on Monday from 3:00 to 5:00 pm. The Northborough-Southborough Youth Lacrosse Association is coordinating the event.

If seeing the cup gets your kids excited about the sport of lacrosse, remember that registration is ongoing for both the boys and the girls youth lacrosse leagues.